Periodically I review gaming materials, generally ones I liked. This is one of them. I'm not an unbiased reviewer - I'm a contributor, playtester, and I backed this on the Kickstarter. I was in on the original idea (something like, "we need GURPS Martial Arts: Technical Grappling for S&W using just the existing stats" which lead to the original article that Doug took, expanded, rewrote, revised, and otherwise re-did into this expanded book. It's spun off, partly, from the author's Dragon Heresy project, and it's a good sign of things to come.

If you like reviews, please see my reviews page. 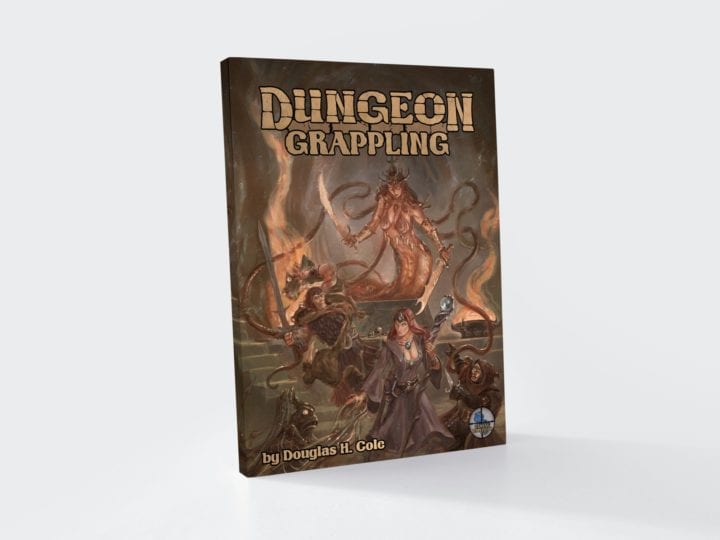 "Bonegnasher had the monster in a deadly hug, right arm crushing its windpipe, left its ribs. It was supposed to have the strength of a dozen natural leopards. In Bonegnasher's arms it was helpless. The Taken laughed, took a bite from its left shoulder."
- Glen Cook, The Black Company, p. 269

Grappling in D&D-based games, though, generally has not been awesome. From the odd mini-game like subsystems of AD&D to the "use at your PCs own risk" system of Swords & Wizardry, grappling hasn't really been that great.

Enter Dungeon Grappling. This is a supplement for retro-clone sets (centered on Swords & Wizardry), Pathfinder, and D&D5.

Pretty much what this book does is change grappling from either a yes/no option (you're grappled, you're not) or a complex subsystem (roll on the grappling table!) and integrate it the basic attack/effect rolls of the underlying systems. It works like so:

- Roll to hit, if you do:
- Roll effect.
- Compare the total amount of grappling effect you inflicted (much as you'd roll damage for a strike) to the target's Control Maximum,
- Determine the effect on the target.

For example, Swords & Wizardry's system uses the HP of the target to determine how much control you need. 10 HP? 10 Control Maximum (although there is another system that is based on size and HD, if you prefer - both work seamlessly with the system). Inflicted, say, between 1/4 HP and 1/2 HP on the target? The table says you have "Grappled" the target. This causes certain penalties on the target, all logical ones (movement and agility is limited, for example) and all appropriate to the system.

If even that seems too complex for you, there is a way to bypass the math of comparing your effect roll to the target's CM and just inflict conditions directly. This, too, works smoothly and easily.

There are also a series of rules you can use to turn that grapple into something more than just a hold for penalties - the Grappling Techniques chapter. These include throws, locks, chokes, using the grapple to get extra damage (pull the guy onto your sword!), wrench something out of your foe's grasp, etc. It covers dragging someone around and getting dragged around. Spells that inflict grapple-like conditions are also integrated into the system.

Using this will take some work. While there are examples and tables to speed it along, any monster that grapples and any PC that does that same (or is grappled) need to have their grappling effect (damage roll, basically) determined, a CM generated (if not just using HP), and tactics thought out. It is more complex than the systems in place for most games. However, it also makes those grappling situations more interesting, in my play experience, and doesn't cause a slowdown of play out of proportion to the extra interest it brings along. It's 52 pages, but it covers multiple systems so it's not adding as much weight of rules as you might think given the length.

Visually, the book is very attractive. The art is full-color and plentiful. It just looks nice. Not only that, but it's layered in the PDF - you can turn off the art and text to make an easily readable and ink/toner-saving printout.

Overall, this is a great product and it is very attractively done. Highly recommended.
Posted by Peter D at 10:00 AM