Thanks to a deep-discount flash sale on GOG, I picked up another game I'd wanted to go back and complete: Might & Magic I.

I'm stalled on Ultima IV until I have a solid day open to spend on gaming straight through to the end. Lack of save in dungeons is a real issue when you're an adult with non-game responsibilities.

But I could use a game I could pop in to and play. This will do. It's like a more highly functional, much more forgiving Wizardry: Proving Grounds of the Mad Overlord. 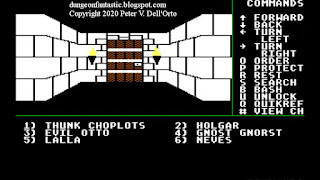 I'd had that back in the day, but I never completed it. Oh, I got obscenely powerful wandering around fighting monsters, so much so that it was rare even the Council of Dragons would stick around for a whole combat round without fleeing, but I never did get to the central quest. I'll do that now.

I have had a lot of fun with it so far, with two caveats:

- it's been cheap with monetary treasure. So much so that I only recently had my characters all leveled up, as most of the time I lacked the funds to train them up. I'm still almost broke - I spent a few times dead broke, almost out of food, and yet had magic items and piles of gems (used for spellcasting, mostly). I felt like my PCs in my Felltower game. I had to quit and restart in one session where I had 4 people who needed 200 gp each of healing, 200 gp each of training cost to level, and one of them picked up a "Large Shield +1" that turned out to be cursed. Removable in town to the tune of 1500. I had 27 gp at the time, and I was grateful for outdoor encounters that mauled me nearly dead but coughed up 30-40 gp per person sometimes. I just quit, unsaved . . . I was looking at 2300 gp just to restore my party to health, which would be 5 encounters with treasure-toting monsters if I got a reasonably good haul without getting further mauled. I mean come on, just give me a bit more cash.

- I forgot that spells are number codes. So I type "Cast" "1, 2" for Bless, "2, 5" for a Sorcerer's Levitate spell to avoid pits, and so on. I really need to find a good compressed table to print out, because I forget.

Aside from that PITA, it's easy enough of an interface.

By the way, is there a way to quit DOS BOX games other than Alt-Tab and then X-ing out the window? That seems to be how I have to do it. It's just weird. And it's either full screen, or a little box on my screen. It would be handy to resize it but have it windowed so I can do other stuff on my PC when I need to.

Oh, and M&M I might be a rare game in which the example characters are hard to beat. I spent a good 90 minutes rolling up PCs, and ended up keeping 2 of the 6 original characters and just renaming them.