I received a package from Noble Knight Games.* Someone mentioned a book I'd never heard of, which sounded interesting. I couldn't find a PDF for sale, so I checked Noble Knight Games. They had it, along with modules 3 and 4 in a 4-book series I own 1 and 2 of. But I figured, while I'm there and ordering, I should see if they have some other things I'd like.

One of them was a boxed set of TSR's Battlesystem.

They had two - one unpunched, and one partly-punched. The unpunched had a better box condition . . . so I ordered it. It arrived today: 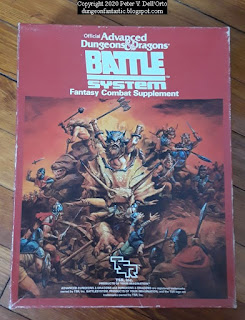 The cover depicts the fantasy battle we all want to have played, but didn't. 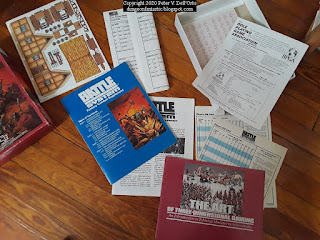 Everything is as-described. It lacks the minis, which is fine. Less fine is the fact that the record sheets have clearly been folded over in the box for years. Ugh.

But hurrah! I have an intact copy of the AD&D mass combat system. Thanks to a used bookstore pickup years ago, I own the original Companion Set and Masters Set books so I have War Machine, too.


The annoying thing is, I owned Battlesystem. As far as I know, I still own it. While I did give away all of my duplicate books at one point, and I did box up and sell off a big whack of gaming material, I don't recall selling Battlesystem. I doubt I would - I really like the rules, and I still have pieces of the sheets (both the originals and hand-typed ones for my own big battles) in one of my folders. I found it when I went digging for my battlesystem rules.

I just couldn't find the rest of the rules.

I have the two minis from the set, and painted the one I liked better. I have all of the counters (well, I'm sure I lost a few). But the box? Long gone. The rulebooks? I just can't find them. The painting guide? It's not with my mini painting guides I have handy, and I can't lay my hand on it. It's very mysterious. Like I said, it's not something I would have given away, I don't throw out game materials, and who would buy random bits of Battlesystem even if I did sell it?

Hopefully I'll stumble across it.

As it stands, though, now, I have a complete set, minus the minis, unpunched. The counters will stay unpunched in case I ever do sell it. I have enough if I want to use the system anyway. Another 801 counters isn't going to make my left better. All I really needed was the rulebooks and tables.

I'm not sure I'll get to use it, but I hope so. I played a lot of Battlesystem in the 80s. I played every battle in the book, and ran the battles from Dragonlance modules, too. I bought H1 Bloodstone Pass and played that out by myself since no one wanted to play a mass-combat centered game.

I have to admit I was surprised when I found some real hate for Battlesystem on the blogs back when I started reading them. Or just antipathy and a general, "It sucks" attitude. I really like it, and I found it worked as scale-modified AD&D pretty well.

We used it in my big Unearthed Arcana-era AD&D game in high school. Only myself and one of my players thought that was interesting, and ending the campaign with a big battle (using Old Stoney, the castle from Dragon magazine, as the objective) was probably a mistake. It was probably going to end anyway, as people had started to drift out of gaming or into different groups. Which was also too bad because everyone was name level by that point - an 8th/12th ranger/druid, a 10th or 11th level Cavalier-based Paladin, an 11th level magic-user, a 9th level fighter a small army of troops and some henchmen, another paladin around 8th level, a thief of some significant level (11th? 12th? I can't recall), and they had just started as a group to enjoy bossing around the NPCs. A lost chance, I suppose.

Now, all I need to make me really happy is a replacement copy of X10 Red Arrow, Black Shield. I should just invest the money in getting the PDF version I do own printed nicely and the counters printed on cardstock, so I could play it again. I know that in my current group maybe 1-2 people might be into it, but I suspect most of the group would just want the war in the background and chafe at needing to do diplomacy and just want to kill things. That reason alone stays my hand on the "Print" button.

In any case, thanks Noble Knight Games. I'm quite pleased.

* I remember ordering from them back in the day when they'd mail a .csv file with a list of books. My copy of Elric! and Sea Kings of the Purple Towns and some Twilight:2000 modules are from them. I missed out on Sorcerers of Pan-Tang, which someone else bought before my order arrived. That was . . . mid-90s?

(Editing Even Later - James Maliszewski did an interview with Douglas Niles, game designer for Battleystem.