I was writing a whole post about a ruling we using in my GURPS game about movement . . . and then I was distracted by this post:

The Long Life of the Original Wizardry in Japan

I got as far as the note that there was a Wizardry: Proving Grounds of the Mad Overlord anime that was loyal to the game.

I'm not generally a big anime fan. There is some that I like, a lot, but generally the fact that something is animated in Japan doesn't actually intrinsically interest me in it. In fact, having seen enough of it, here and in Japan, it actually tends to set the bar a little higher.

And very loyal to the original game?

One movie, not dozens of episodes and half-dozen seasons?

I watched it this morning while I cranked out some miles on my airdyne.

Having seen it, yes, it's loyal to the game.

- a blue ribbon to operate the elevators? Of course!

- entering the dungeon, then buffing right away? Can't cast spells in town.

- Casting Mahalito? All the time, as soon as you get it.

- Someone's a ninja? Yes, but it's a tough class to qualify for.

- Muramasa blade? Only samurai could use it; I had samurai but never found the sword.

- planning a delve as a raid straight to level 9, clearing it out, and then coming back up - and doing that day in, day out? It's how I leveled. I never spent any time on levels 6-8.

- opening a fight with Tiltowait? (IIRC, Werna - spelled W*E*R*D*N*A in the game - is immune. I might be remembering incorrectly, I fought and defeated him 37 years ago or so and never did it again.)

- each combatant leaping forward to fight the enemy, springing around, and then giving everyone a chance to do their thing in a fight? Well, no, but it is an anime.


If you've played Wizardry: Proving Grounds of the Mad Overlord, you'll probably enjoy it. If not, I suppose it's not the worst way to spend 50 minutes. Only 46 if you skip the closing song! You'll also get an idea of what inspired my approach in my own megadungeon used in my campaign Felltower. I didn't use elevators, but I did use a sort-of blue ribbon, put a mad wizard in the dungeon, have a way to go way too deep without mucking around on the upper levels, and more. 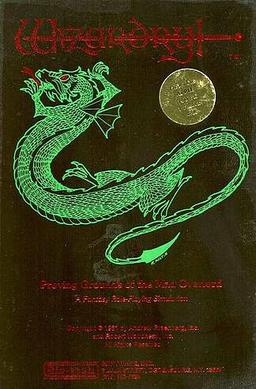