The Rest of My Order - Zayene & Arcane Treasury

I mentioned my (re-)purchase of Battlesystem yesterday.

What else did I get?

I purchased some Rob Kuntz stuff.

First of them, the one I went looking for, was El Raja Key's Arcane Treasury. I saw a mention of it over on The Blue Bard, and then looked and saw a review over on Grognardia. They intrigued me enough to take a look. It doesn't seem to be available in PDF, but it wasn't much on Noble Knight Games.

So now I have this: 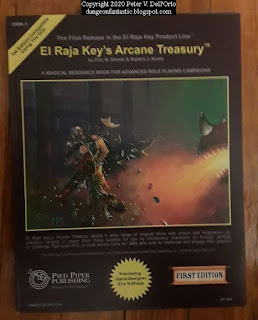 While I was there, I figured I'd fill out my "Zayene" series of adventures.

I picked up the first of these, the D20 version of M1 Prisoners of the Maze, at a gaming store that was down the block from my martial arts school. That's the same place I purchased the Silver Anniversary set, too. I purchased the second either there or another game store. Now I've finally gotten the last two. I don't particularly mind that they're different editions. 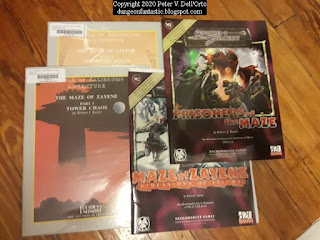 I'm not sure I'll ever run them, although the first one especially has a lot going for it, especially as a one-shot and not a campaign drop-in. I'd need to basically re-write it for AD&D or GURPS, though, as I don't run 3rd edition-compatible D&D. It would be easier to re-write it for GURPS than for me to convert it to AD&D, though. I'd actually be better off getting the original versions if I intended to run them in AD&D. The other two that I just purchased, I'm not sure yet - I need to spend the time to read them all in a row.