I finished Conan: The Cimmerian tonight.

The ending was a little frustrating. The game kept crashing in some fights or as I crossed into certain rooms.

So I would finish a fight, leave the final location, save, and then come back in. Eventually, I was able to get through everything.

The end was just a big rush - run into Toth Amon, run away because I can't kill him, run back, try to get past him . . . and eventually I did so, after this crash: 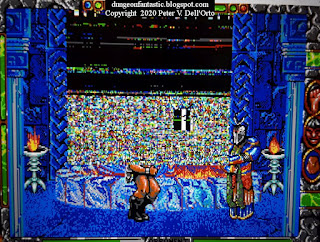 This one didn't crash: 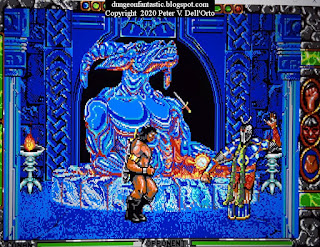 In his chamber was a still-beating heart in a jar. A few strikes and it was done. 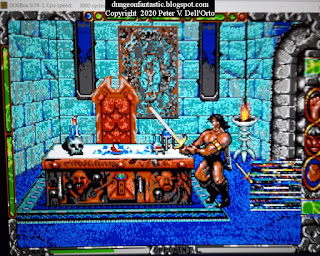 Toth Amon turned into a skeleton and then into a pile of graphics error, and then the screen went to the ending screen: 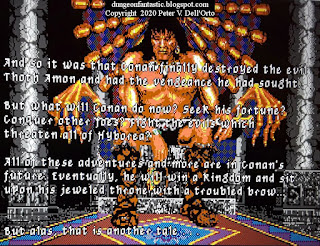 It was fun enough. I can mark that one off as complete, on my list of old games I played but didn't finish. I'll get back to Ultima IV soon, I think - I want to finish it before I go onto Ultima V. IV will just require a day off with nothing else to do, since I can't save in the final dungeon and it's pretty long. Like, hours of play long from what I can tell.

All in all, Conan was fun. It's worth a go through. Knowing what I know now, I could have really gotten through it in half the time, using a few teleport scrolls to pick up what I needed and just move on quickly to the next quest. I'm glad I went back to playing it.
Posted by Peter D at 6:55 PM