Getting my biases out of the way first - I'm a GURPS fan, GURPS author, and the author of this particular book is my friend and frequent co-author Sean Punch. I'm not pretending to be unbiased, but I will at least endeavor to be fair. 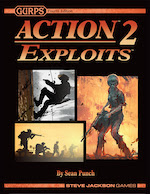 GURPS Action 2: Exploits is the second of a (as-yet) three book series. It is preceded by Action 1: Heroes and Action 3: Furious Fists.

Action, like Monster Hunters and Dungeon Fantasy, is basically a worked example of a genre or game style for GURPS. The Action books go through GURPS and set up all the possible options for how you'd want them to simulate an action movie. The first book in the series sets the stage with character rules; this one, like its DF counterpart, centers on how to run the adventure.

The nice thing about GURPS Action is that it isn't really a simplification of GURPS. It's a refinement of the rules for the specific case at hand. Without discarding GURPS rules it manages to provide a cinematic feeling version of those rules to use. A good example are Range Bands, used for the chase rules and for combat as well. Instead of figuring the distance in yards and then using the Speed/Range Table, you just decide on the range band (touching range is Close, for example, but sniper rifle distance is Long) and use the flat penalty for all attacks in that combat (or at least between those combatants). This approach de-emphasizes tactical combat and hex map maneuvering - which while very cool in a Tactical Shooting type game it's death to large-scale action-movie fighting. I like this enough that I'm going to grab it for my DF game for our mapless or map-light fights, where broad penalties and "you're in this hex-ish" is how I keep the pace up.

The chase rules make use of the Speed/Range table for bonuses, so it's easy and straightforward to assign bonuses. You chose your maneuver, your opponent chooses his, you make your rolls to see how it goes, and then have a contest of skills to see if the pursuer gets closer or further. And because character skill rules over reality in action games, it's merely hard but not impossible for a action hero on foot to run down a sports car in a chase through good rolls, judicious use of Lucky Breaks (basically a way to serendipitously place things you need in your path), and clever action. If you ever wanted to play out a Bond (or Popeye Doyle) car chase, Parkour your way through a cityscape to run down an acrobatic bad guy, or execute similar stunts, the chase rules are both easy and fun.

The single most useful bit of this book are the concepts of BAD and ACT. "BAD" stands for Basic Abstract Difficulty, and it's the net penalty to most rolls the heroes need to make in order to get things done. The more leverage the bad guys have, the more stuff they have going for them, the worse the BAD penalty is. The heroes counter this by using their skills to accumulate ACT, or "Accumulated Complementary Total." Rules for one teammate using a skill to help another (Complementary Skills, which I stole shamelessly and used in GURPS Martial Arts: Gladiators) encourage teamwork and action-movie style synergies. This is where Action makes it clear that it's more influences by Ocean's Eleven than by solo action hero movies - because gaming groups are generally a group, not a single action hero-playing hero and his hapless sidekicks.

So an "action movie" game can start with the bad guys giving a large penalty to any attempts by the heroes to get onto their base, stop their death ray/poison gas weapon/steal their loot/whatever. But the heroes can use their high skills against that penalty, and by securing successes whittle the penalty away. The players can always choose to just go for it, but the more cleverness they use in whittling down the BAD score the easier their mission will be. It lets you choose how much work you're willing to do to get the job done - you're rewarded for putting in some Mission Planning Montage Time, basically, but you can always cut right to the chase and just suck up the BAD as the cost of being a hero. Good stuff - nothing arbitrarily stops you but all the build-up in the movies makes sense and directly benefits those that do it. It even has fun little bits like heroes working for law enforcement or another overarching power needing to ask permission to act - and how it works when they ignore it and go ahead guns blazin' anyway.

The great thing about these rules, in my opinion, is that it makes both success valuable and failure fun - failing a roll doesn't end the game, it just changes the nature of the encounter or the level of threat. It's a really elegant matching of mechanics and genre feel, without feeling the least bit non-GURPSy. Skills matter, advantages and disadvantages matter, and at the same time play style matters. It reminds of a much-smoother version of the old Victory Games James Bond 007 RPG, meshed with the integrated and easy play that GURPS is capable of.

Overall:
Content: 5 out of 5. Everything you need to run a modern action game in GURPS, without the stuff you don't need.
Presentation: 5 out of 5. Well written and easy to follow, and speaks the language of the genre without getting in the way of clarity.

Overall: If you are into modern action games, and know GURPS, this is a great book to look at. Even if you don't know GURPS well it's a great look at how to put together an action plot that hangs together like a movie would without being a railroad. GURPS GMs can find a plethora of useful rules for running a game in a more streamlined, cinematic style. The chase rules alone are worth getting, and the book is packed full of good advice and easy to follow rules for making a fast pace game. Under-appreciated and highly recommended. I'm sorry it took me so long to get it.
Posted by Peter D at 8:18 AM