Review: A2 Secret of the Slavers Stockade

Part 2 of a 5-part look at the Slavers series.

Here is my review of A1 Slave Pits of the Undercity.

For my reviews in general, please check out the reviews page. 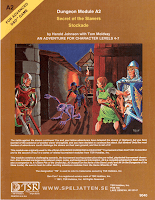 A2 Secret of the Slavers Stockade
by Harold Johnson with Tom Moldvay
Levels 4-7
40 pages, including one page of maps, plus maps inside the cover
TSR 9040

A2 is the second in the Slavers series of adventures for AD&D. Like the rest of the series, it was originally a tournament adventure. Also like A1, it seems to have been two rounds - one above ground, one below.

It takes place in and under a stockaded keep. The setup is that the group found that this fortress is a front and a way station for slavers, not just, er, innocent caravans of evil humanoids going through a dangerous land. The group is tasked with finding out what's going on there, and to find out the next step on the path that leads to to the nefarious slave lords.

Once again, an escaped slave gives you a way in - a slave climbed out of the gatehouse's second floor via a rope of rags, and as the escape wasn't detected the rag is still there. The lack of aggressive patrolling (or cleaning, or housekeeping of any kind) is blamed on the humanoids being pretty lax about security. Either way, done by the tournament, you get right up into an abandoned section of the gatehouse and then need to work your way into the keep proper. The tournament basically bypasses one of the big problems with a fortress - it's not meant to let you access the interior easily.

From there, the party has to deal with a number of monsters, lots of guards, the usual traps and set-pieces that this series features prominently. Like A1, you get a lot of excellent traps and very tactically interesting set-piece battles. One thing I forgot to mention in my review of A1 is that they give zoomed in tactical maps of those set-piece battles, so you can see exactly how the various combatants are arrayed from the start (and, possibly, show to the players to make it even more clear.) The foes use the terrain and special weapons and combined-arms tactics well. None of the big fights are solvable with just a single fireball and some good damage rolls. A few come with pre-determined starts and unavoidable NPC actions, though, which can be annoying. But not all of them, and tactically clever players versus tactically clever foes using their surroundings to give them home field advantage can't help but be fun.

The traps as equally good, and make sense in a fortress - they're generally manned traps, or ones you can see being a minor annoyance to the occupants but a major problem for unprepared attackers even if they're careful and wary. Traps backed by troops is the norm here.

The evil leaders in the adventure are given just enough development to make them stand out and interesting. Markessa, the mad scientist-wizard (and yes, there is an owlbear nearby - it's the zeppelin and monocle of magic-using mad scientists), a blind swordsman, disguised monsters, named weapons (even if non-magical) - there is a lot of flavor here. The leaders are also described in a special section up at the front of the module, too, making it easy to know who you'll need to deal with if the adventurers make repeated delves. The strategy of the fort to repeated attacks is also covered, as is what they'll do with you if you surrender (my advice is - don't.) It is sadly lacking an overall roster and notes about reinforcements, something that would be extremely valuable to a GM trying to actually deal with multiple delves without a lot of prep time in between to figure out who is left and where they go.

Ever wonder what fortress the DMG is talking about?

It's very possibly the one in A2.

The expanded, non-tournament version is much more lethal. In the tournament foes won't pursue and an alerted fortress merely triggers a few (admittedly nasty) traps, and the fortress is reduced to a narrow path of set encounters. In the expanded version, there are more guards, more encounter areas, wandering monsters (including strong patrols), and pursuit will be active. So there are more enemies, more places to deal with, and they are more alert and more active. Not only that, but a few minor encounters in tournament play (like an haunted section of the fortress) are expanded to be full, and quite dangerous, encounters.

In short, the fortress is bigger (more areas to explore), had more active occupants, and what is there is often more directly lethal and complex.

There are some very cool encounters, too - a madman, slaves, the "caveling" cast-offs of Markessa, and more like that. There are some ways to bypass the traps (since the occupants might need an easier way around), and some chances to avoid combat. A few folks will live an let live, if you do so first. Others will actually ally with you, including some (at first) seemingly unlikely ones.

It all makes sense together, and it's a very cohesive fortress with a lot going on in it.

But generally, a group of 9 3rd/3rd-6th level tournament adventurers can handle the tournament portion, but no way that same group will handle the expanded fortress.

For most of the reasons aboven, this adventure was one my players never cleared. It was just too much for the levels and their numbers. No one even got down to level two, few people got far into level one. Considering the age of the guys I was playing with at the time I ran this, it's not a surprise. Mostly people dithered around on the upper levels, alerted guards, got shot up, ran away. No one really got interested in continuing the adventure.

This was also the place where Playing D&D with Juvenile Delinquents happened.

In fact, when I later ran the slaver series, I just skipped this and went right to the later bits.

This isn't to say it's a bad adventure. It's not. It's just that the numbers make it so lethal, the setpieces are so dangerous, that you probably can't get through it at low levels. I'd use this - and I have used pieces of it! - but it's a rough module for its supposed actual use unless you run it strictly as a two-part tournament run. As a ready-to-go evil fortress with secret horribleness underneath it, or something to mine from, it's excellent.

Like a lot of AD&D modules, it's not bad, but you'll need to adjust the numbers or raise the power level of the PCs. A fortress in GURPS is going to be extremely lethal instead of merely lethal like in D&D. But the set-piece fights and traps will be possibly more interesting since both sides have so many more tactical options. You just need to be extremely careful running this "as written" but with GURPS because of the sheer number of foes. A smart party will sneak in a back way, if they can, and get out - or bring an army and lay siege to it. A straight-up assault is likely to fail. And as usual with AD&D modules, the opponents need a little more access to magical support to prevent simple spells from being win buttons - but not all of them. The leaders generally have some magical support, and unlike many adventures they don't fight one-on-many.


Overall: Good stuff. The art is excellent, too. Better for plunder than run as written for the levels listed. But for those of you who eye the Keep on the Borderlands and think it's better to plunder the Keep, well, try this stockade on for size.
Posted by Peter D at 11:07 AM