Review: How to Be A GURPS GM

How to be a GURPS GM 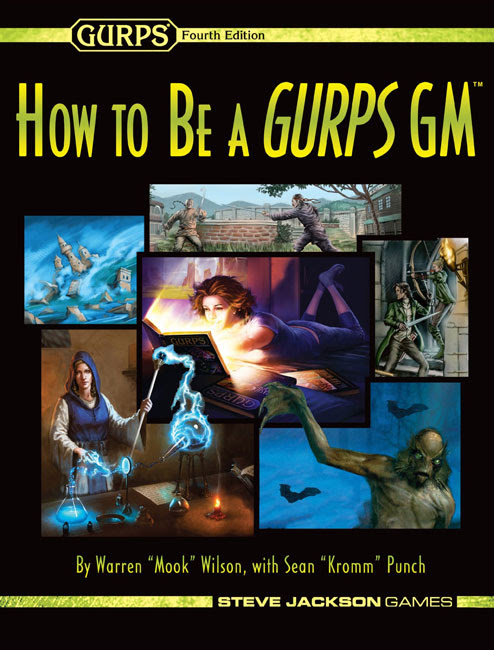 One thing about GURPS is that it is a toolkit game. You are given the pieces to make almost anything (although not everything equally well, admittedly) and are expected to pick and choose from those pieces to make your specific campaign work. Out of the box, you need to make a lot of decisions as a GM before you can run the game smoothly. While GURPS has always had some generic GMing advice, it really hasn't had a very specific look at how to run the game as a GM. This book fills that niche. It's written by a long-time noted GURPS player and website maintainer, with lots of comments by the Line Editor.

The book seems aimed at someone who is both a) new to GMing (if not roleplaying) and new to GURPS. If you are an experienced GM but not familiar with GURPS, or an experienced GURPS player but as yet hadn't GMed, much of the book will feel a bit old hat.

The book takes the form of a mix of explanations by the author of the various rules and their impacts on play, and lots and lots of excerpts from comments written in forums and elsewhere by the GURPS Line Editor, Sean "Dr. Kromm" Punch. You gets this back-and-forth style of a paragraph written by Mook, offset comments by Kromm, and more discussion by Mook.

The books goes through basic rules, character generation, combat, and actual play. It backs up general discussions of mechanics with specific examples and explanations, and doesn't stint on the details where they are needed. Rules that get discussed get page number references so you don't have to check the index or TOC to find the original rule to check. It covers a lot of ground that might not be obvious to a new GM opening up GURPS Basic Set for the first time. It also deals with some of the basic assumptions of GURPS and point-buy systems. A good example of that is the explanation of why combat skills and non-combat skills are costed the same - it's about screen time/utility in gaming, not ranking the combat effectiveness of a character.

My personal favorite is chapter six - combat. Lots of the combat advice is excellent, all of it is accurate, and includes specific looks at commonly built and run characters with examples. Want to know for Telekinesis affects combat? It's there. Dual-Wielding characters? How to build them and run them is covered. What to do to overcome defenses? There is a whole section. It pulls together the disparate parts of the combat system into topical areas, which makes it easier to see the whole for someone unfamiliar with the system. The combat chapter is excellent, and take that from someone who thinks about combat in GURPS pretty often. It makes some things that, despite careful wording in Basic Set, are not terribly clear in practice much more clear. It gives considered advice on map vs. mapless combat, detailed vs. less detailed combat, and what rules only seem to add complexity but rather speed up play considerably.

Where the book falls a little flat is in the generic "how to GM" advice. Because it necessarily shows a single way to GM, it missed a lot of "What if?" advice valid for different approaches. Much of the generic advice is just that - it's not GURPS specific, and changes the focus from things you need to know to run GURPS to things you need to know to GM. I think the intent is to make it a one-stop shop for learning to GM. But in my opinion it is the weakest part of the book. You end up getting a specific vision of one way to run games in general with GURPS as the rule set, instead of how to do things with GURPS. Once it gets into areas any "How to GM" discussion covers it loses something compared to the "How to GM GURPS" portions.

How is it for experienced GURPS GMs?

The price point is a bit high for a book that's aimed at less experienced GMs, but the odds are very high you'll get some utility out of the book. Just having handy lists of things to think about, options to consider for various levels of detail, and rules impacts to be cognizant of is pretty valuable. You wouldn't regret reading this book before setting up a new campaign, even if you've done it all before. But for the price, you're getting a lot less than a new GM would be.

Overall, I like this book. I'm glad I got it, and I'm glad I read it. I wouldn't hesitate to recommend it to a person new to GURPS and/or new to GMing GURPS. For an experienced GM, it's handy but not essential. It's well written and easy to refer back to once read (critical in a GM reference!), and sort of fills a "DM's Guide" niche in GURPS.