Review: A1 Slave Pits of the Undercity

I finally had some time to get back to reviews. Recently the A-series of modules came up in a discussion about capturing PCs by fiat. So I re-read that quickly and then decided to get right onto reviewing the whole series. Unlike the Giants series, these are long - the entire G1-3 is not much bigger than A1, so I will do each A-series module in turn.

I also have - and ran - A1-4 Scourge of the Slavelords. However, although it includes modules 1-4, it also changes substantially how you approach those adventures and fills in things in between. Since they are fairly big changes, I decided I should deal with that supermodule in its own post. 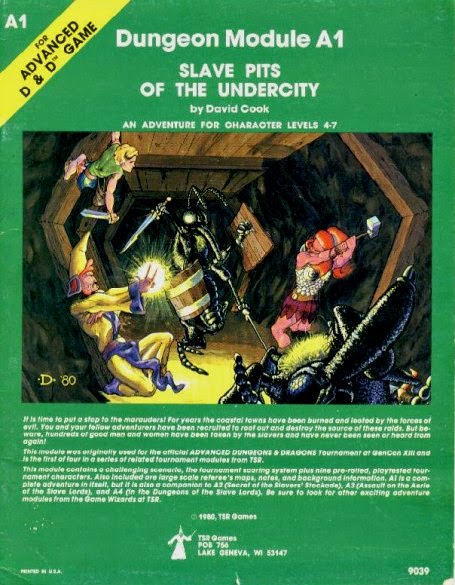 A1 is the first of a four-part series of tournament adventures. According to the module, the original tournament was split into two rounds:

- One round of exploring the upper works, and discovering the way into the sewers.

- One round of exploring the sewers, and eliminating the boss slaver and finding the clues that lead to A2 The Secret of the Slavers Stockcade.

The released adventure is much larger, with an expanded upper works and a much-expanded sewer level with multiple connections up and down between them.

The setup for the adventure is simple - the disorganized lords along the coast have long tolerated the raids of yellow-sailed slave ships, or bribed their way out of them. Recently, the slavers have grown more bold and aggressive and burned villages and ignored agreements. Instead of sending a fleet, they decide to send a few parties of adventurers [tournament setup, right there] to try to infiltrate as potential slave buyers and backtrack the slaver's bosses.

The PCs show up at the ruined city of Highport, set in the Pomarj of Greyhawk. The city is inhabited by humanoids and half-humanoids, and visited regularly by slave traders and outsiders. So they can easily slip in and into the secret back door of the slaver's Highport headquarters, which was revealed by an escaped slave before they left on their mission. The lax guards don't really notice the intrusion.

The module puts a lot of effort into wandering monsters in the ruins, along the walls, etc. - none of which matter at all in tournament play. It only matters if you chose to run the game without the players getting secret inside knowledge to let them get into the place, or didn't allow them smoothly sailing through the ruins of Highport. If you follow the same setup for non-tournament play, the additional detail isn't worth very much. I did like that there is a "Wandering Monster Roster" - as you kill them off, you cross them off, and there is a limit to how many giant crocodiles or half-orc cleric/assassins you can just blunder into. As well, it's made clear that any human-led slave buyers you run into will simply try to deal with you, not fight you, as they aren't there for that at all.

The adventure overall is very good.

It's well written, although often fairly dense - no encounter is just a statline, and even empty rooms get some text and explanation. The box text is clear and doesn't commit the crime of telling you what you do or starting interactions - it's purely descriptive and covers what you can see, hear, and smell.

There are some clear instructions for what happens when PCs try interesting tactics, too, to disable traps, use noxious materials as weapons, and so on.

Not only that, the setting itself is pretty cool. The ruin is clear, and often the PCs are wading through water, dealing with burned-out rooms and timbers, plants grow down into tunnels, and so on. It's a creepy place that feels like an undermaintained sewer under a ruined building turned fortress. Everything in the adventure, including the choices of monsters, supports that. Some monsters are interesting choices (this adventure features dopplegangers at several points, for example) but all make sense. It doesn't feel like a random funhouse but rather like an active yet badly maintained slave pit.

Additionally, many of the fights are tough. Foes use cover, flanking, trickery, special weapons, weapon mixes, and sheer numbers to challenge you. That's even before you get to terrain and special monsters. Several of the fights are potentially overwhelming for even a fresh party but come well after you've had a chance to get worn down. None of it seems unfair, just hard. The tournament version, of course, cuts many of those out. In the tournament version, you get all of the set pieces but not as many foes to deal with. In non-tournament play, you'd almost want to err on the high side of levels and numbers to deal with all of the extras you simply can't avoid unless the GM makes some unreasonably PC-friendly decisions.

As I mentioned a few times, this was a tournament adventure, and expanded for publication. In the tournament, the fact that the upper works is one round means you can't really have half of it unlikely to get explored. As a result, the connection between the two halves of the upper works is simple - there is a small bit of underground passageway you can follow from one to the other. In non-tournament play, that small bit of passageway is expanded into a large encounter area with active and dangerous foes and a connection to the slave pits themselves. In other words, it's easily possible - and in fact, if resource expenditure is even a small concern - to avoid half of the upper works. This is both good and bad. The good is that it means the dungeon offers some real choice, and it's not purely linear. The bad is that generally half of the upper works is ignorable, is better ignored, and takes serious exploration to get to without much reward for doing so besides some assorted loot and hard fighting. As my war stories section will go into, no one did that exploration in my two sorties into this adventure.

The adventure also includes two new monsters (the Aspis, an insectoid race; and the Giant Sundew.) It also has the original tournament scoring, which interestingly placed a higher premium on rooms explored than PC survival. Better to clear the place with high casualties than the not clear it, which meets the mission description well. There are also nine tournament characters, ranging from 3rd/3rd level to 6th. They had great names, like "Ogre" the human fighter with 18(56) STR, Dread Delgath the magic-user, and Phanstern the illusionist.

The illustrations are all by Diesel LaForce, Jim Roslof, Bill Willingham, and especially by Jeff Dee - who did the cover and several excellent interior pieces as well.

This module is special to me in that it's the only Slave Lords adventure I ever went on as a player. I ran a solo 6th or 7th-level Archer (from Best of Dragon Magazine III). I pretty much snuck in, went down the sewer levels, ran around fighting aspis for a while, and then fled the dungeon. It was fun, especially when I was pretty much lost and being chased. I never completed the adventure, but it didn't matter.

Years later I ran this on its own, as supposedly part of the A1-4 supermodule, but I used the setup from the original. My players went in the back way and right down to the sewer levels and cleared much of it out before a disastrous fight got them all captured or killed. The couple of players who decided to keep playing were okay with being slaves for a bit, and it lead to a whole different (and pretty amazing) side campaign. I do also remember running this for my Elementary School group, but nothing beyond that - I just have vivid memories of using some critical hit rules in an early setup fight for it. It's possible the campaign ended before they reached A1.

In neither case did half of the upper level ever matter. Something that was unavoidable and the whole point of the upper level in the tournament, by dint of the changes to the map, was actually hard to encounter. Like I said above, this is good and bad. I kind of feel bad about it, because you miss some awesome set-piece fights there and some trickery and nastiness - all of which, once defeated, makes for great adventuring stories. Bypassing them entirely, not so much. I don't think my players even knew they missed anything.

I like so much about this adventure's set-pieces - cool tricks to introduce reinforcements, use of cover, special weaponry, tricky battlefields, reinforcements, trickery (which is detectable if you play well), and special foes. I deliberately crafted a section of Felltower (the Flooded Prison) to use the sunken slave pits and fighting along the narrow tops of the cages in my current game.

Overall, a good adventure either as a whole or to plunder from.