Review: A3 Assault on the Aerie of the Slave Lords

This is part 3 in my series of reviews of the Slavers series of adventures.

Here are the previous parts:

For all of my reviews, please see my reviews page. 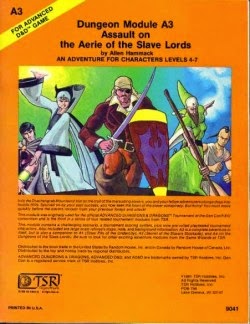 A3 Assault on the Aerie of the Slave Lords
by Allen Hammack
Levels 4-7
28 pages including one page of maps, plus maps on the inside cover
TSR 9041

A3 is the third of the four Slavers Series modules (not counting the recent A0 that was added to the hardback reprint, or the extras in A1-4 Scourge of the Slave Lords.) In this adventure, the PCs have tracked the Slave Lords down to a volcanic crater, within which is the hidden town and fortress of the group. The PCs find multiple entry points into an underground tunnel system, and have to pick the right one and make their way in.

The initial tunnel system's "choose the right path" bit reminds me of the story "The Dreaming City" and the entry to Melnibone, but it's not quite so developed. You quickly end up on the single path through to the end. The tunnel system ultimately leads to a city, and the city contained clues to the hidden lair of the Slave Lords (since the PCs don't have the firepower to assault their keep.)

Like the other adventures in this series, you get a mix of set-piece fights with mixed foes, clever traps, well-nigh unavoidable obstacles (but ones a suspicious and cautious party can bypass with minimal cost, given the clues they find), and so on.

A3 is both one of the best and worst examples of the Slave Lords series. This is really where the railroad that the A-series is famous for show up. Even in the non-tournament version, there is pretty much one way (and one path) ahead, and one way out. Some of this makes perfect sense - you've got an escape route for the slave lords (the connected a natural cave area to an area near their city) and the path to their hidden underground council chamber. Both are guarded and heavily trapped, but it's also clear how the slave lords would avoid any inconvenience with them. So it does make sense you wouldn't have a lot of options and traps and guards would just be lined up to ensure you can't bypass them.

On the other hand, whether it makes sense in game or not, a railroad plays like a railroad. You go through encounters in order, each is a separate set-piece, and must clear them all in order in one go to finish the adventure. As I said, it makes sense in a tournament but it's not ideal for a dungeon.

This module also has some fairly annoying "X will happen" type events in it, so even cleverness on behalf of the players wouldn't let them get around any encounters in tournament play.

In between the rails is a city adventure, one of the few encountered in any old TSR adventures, especially for AD&D. You need to wander around the hidden city of the Slave Lords on a volcanic island in the middle of a lake, and find a way into their inner fortress. Handily, you are able to discover entry passes and a map, so the players have a map to look at. They lampshade the passes by letting you take them from some slave traders, and during the series it is clear there are a lot of varied traders about so it's not implausible they'd been around, overconfident, and unfamiliar to the guards.

The city adventure is really straightforward. There are folks with clues, lots of places are closed (you arrive at night, and have to keep a move on), and a fair number of people who'll accept bribes. The guards are dangerous but generally no one is tagged as being especially suspicious - I guess when you live in a well-guarded hidden city with visitors from afar you assume to shifty-eye adventurers are just more of the same. It's a fairly easy investigation, akin to ones you'd find later in games like Bard's Tale - open the right door, bribe the person inside, get a clue to the next door and go open that. It could easily be expanded to much, much more, but the module gives only the bare bones.

On the upside, that means you have a city you can quickly digest and be ready to run on the fly for anything, and not a lot of text to plow through that is unrelated to doing that. The writeup of Suderham is shorter than that of Hommlet in T1, and probably easier to run.

The art, like that of the rest of the series, is good and it's evocative. Some of it would be useful as player handouts but give just a wee bit too much information away. The Jeff Dee cover makes the bad guys look especially nasty.

One other thing that I like with this adventure is that the Slave Lords - should you fight them - have a coordinated fight plan. It comes with turn by turn descriptions of what they'll do for the first part of the fight. It was a bit I'd use for my own play, often carefully writing out 3-4 rounds of combat tactics for bad guys and monsters. I don't do that as much anymore, but it's extremely helpful when deploying foes who are supposed to be coordinated and experienced and who have interesting abilities to deploy.

I like their names, too - Ajakstu, Nerelas, and Feetla the pirate (which only decades later did I link to Jean LeFitte).

All that said, I've run A3 a few times and it was fun each time. Okay, the time I ran it with the scripted ending wasn't one time anyone was happy. And once (in elementary school) I ran it with the non-tournament ending and the PCs were getting their butts kicked and then I think a lot of kids suddenly decided to switch to my friend's Star Frontiers game he suddenly decided to run. (We played on lunch break, so the fight was ongoing.) I do remember skipping the city adventure at least once, because it didn't have any fighting, and not handing out the player map because I didn't want to rip it out of my module and no one had access to a photocopier.

It was in acid-based trap in this dungeon that my current player's character Wyvern Intestineater died, too.

I know I ran it other times as well, either complete or using parts of it. The hit-and-run maze dwelling minotaur is a favorite lift, bits of the "throne room" (room A9), and the "cunning cubes" are favorite bits of mine to lift and re-use. But otherwise, there aren't as many liftable setpieces in this one, and the traps are very specific and a bit too elaborate for anything except a specifically designed and well-maintained barrier.

I never did get to run this in its entirety. Even in my later re-run of the series since the party was captured and broken up way back in A1 and never reached it.

This one is pretty good for GURPS, in that the encounters tend to be of reasonable sizes and present some interesting battlefields. The usual concerns about spells are here, though - one See Secrets spell and a single Shape Stone spell will bypass most of the dungeon, though, so you'd want to think about how the Slave Lords figured those spells into their plans.


Overall, I like this adventure but the strong-arm ending and truly linear nature of it is something I'd only want for a change of pace, not as a standard approach to gaming. Still, the fights are entertaining and dangerous, but it needs a lot more outside support to make it make sense outside of tournament use.
Posted by Peter D at 12:47 PM