So way back when I ran 1st edition GURPS, I converted a lot of D&D monsters to GURPS. Basically because I liked D&D but didn't like the D&D rules as much as point buy and defense rolls and whatnot from GURPS.

Also, there wasn't a lot of GURPS stuff out at the time, although that eventually changed.

One of the monsters I converted was the Fiend Folio's Eye Killer. We ran into some in the Castle of the Mad Archmage in S&W, but I can't find where in my summaries.

I was moving around some stuff this morning and pulled out my 4 x 6 container and decided to take a look, and spotted this guy.

Here is that conversion, not even slightly updated to 4e, complete with the notation style I used back then. 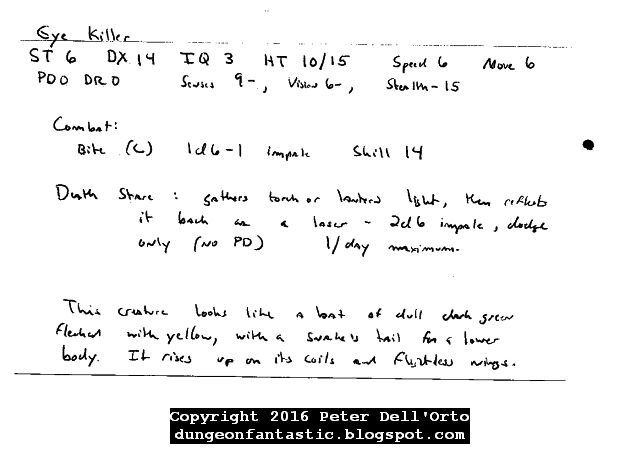 If you can't read my handwriting, you'll really appreciate how it feels to have school with me.

This creature looks like a bat of dull dark green flecked with yellow, with a snake's tail for a lower body. It rises up on its coils and flightless wings.

You can see my early style - no traits, no details, no skills that didn't directly affect combat, etc. Like a DF monster writeup or compressed statline but even more sparse. Back in those days I would just assume a lot. Does it breathe? Maybe, maybe not. Can it see in the dark? Probably, I didn't mention that. I left a lot to whatever felt right. In the years since where I've written more for other people's use, I've been more complete so it's clear what I actually mean a monster to do. And so that way when I pull out 20+ year old 4 x 6s I don't think, when I wrote this, did I mean the death stare was an auto-hit with no range limit or did I just forget to put that down? That kind of stuff . . .

How was it in play?

Honestly, I can't recall right now if I ever actually had them come up. Probably, and if so, it would have been against my early group. I'm sure they didn't last long against them. That was a generally lethal group, probably partly because we didn't use tactical combat and because I effectively let mages have a free extra mana reserve. Plus, it was a pretty large group with long-playing PCs and lots of magical items. If they found the eye killer's room in my version of the Dungeon of Death (we played in the Forgotten Realms), I just can't recall.
Posted by Peter D at 10:07 AM