Here is an updated version of the Known Entrances of Felltower post.

Bugbear Tunnels - a narrow entrance requiring crawling, from the surface ruins on top of Felltower.
Current status: At least one inside access point has collapsed completely.

Castle - not an entrance, but surrounds the main entrance.
Current status: Accessible. The portcullis is in the "down" position but a passage has been made it in through a steady stream of Acid Jet.

Dragon Cave Mouth - a mouth-shaped cave on the west side of the mountain, leads to the cavern warren roughly 100' or so below the first level of tunnels. Originally guarded by a fierce dragon.
Current Status: Home to a giant of some kind, and a pack of dire wolves. 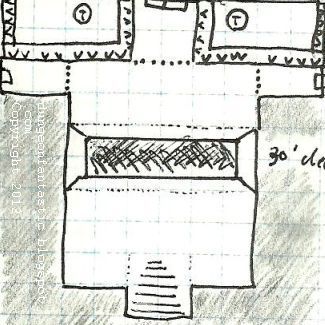 Main Entrance - fortified main entrance under the castle (pictured above).
Current status: Occasionally guarded by orcs via the "pillboxes." Pillboxes are heavily shielded against magic and direct attack, so the PCs haven't yet been able to fully disable them. Requires entrance through the surface castle.

Tower Entrance - there is a "hatchway" entrance under the collapsed ruined tower knocked down by the PCs.
Current Status: Often locked from within. Requires entrance to the surface castle of Felltower. Recently re-opened by the PCs. The PCs have investigated ways to break the locking mechanism but do not have the right tools for the job.

Well Entrance - a secret entrance at the bottom of a dry well.
Current Status: Inside the surface castle of Felltower, completely blocked up (filled top to bottom with trash, dirt, feces, etc.)

Gates - there is a gate from the Lost City of D'Abo to the "apartment level" aka "the gate level" aka "level 4."

There are rumors of other ways in, too, but they may have been identified already:

- the "slums" entrance. Heard of in rumors, but not confirmed. Attempts to find it by "research" have been considered but no one has enough Streetwise for a reasonable chance of success.

It's interesting that as a result of play, the PCs discovered a lot of entrances, but ended up getting them sealed off by the orcs (and others, possibly.) Attempts to ensure an entrance stays open through destruction - such as the well and the walls - have generally backfired by forcing a complete blockage.
They have not been able to open up any of the previously open entrances that were sealed. Most of them involve being inside the gates in any case. There is still no convenient and safe entrance to Felltower.
Posted by Peter D at 10:57 AM