Pictures and Tidbits from Felltower Session 87

A few tidbits from Sunday:

- Hasdrubal's player decided that this orc's hat was a Renaissance painter's hat. I dubbed the orc Michelangelorc, the finest orc artist in the world. But since orcs don't value art, he's been bullied and forced into front-line combat vs. naked barbarians.

Or maybe they'll be an elite hit squad of orcs.

But more likely, the sensitive artist orcs. (They're the ones singing "sensitive" in the background.)

Next to him is a Vlad the Impaler Heroclix. 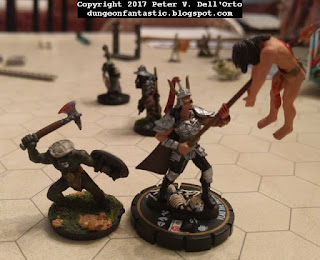 - the next plan for the Lord of Spite, besides "leave him alone until we're all ridiculously powerful," is to find a few more things to try against him . . . and use them all. Not "and then he steps onto Puissance +1 caltrops and we win!" or "and we all buff up Will and we win!" or whatever else, but all of those kinds of things all together. Basically, hit him with the shotgun of ideas of things that might help defeat him. He's not a puzzle monster, he's a brutal demon lord with servants and a willingness and ability to vary his tactics even if the ones he tried last time worked last time. And honestly, people generally rolled really badly against his initial attack and that set the tone for the whole fight. It got ugly fast because everyone was deaf and stunned.

Well, actually, next plan is "keep sending in servants to pick up coins while we wait outside" but that's unlikely to work forever. The Lord of Spite isn't a moron, he's just spiteful. 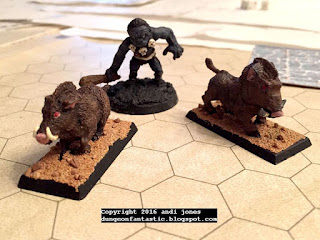 - Here is a quick snap I took of Mo's fight. The pencil across the map is the Force Wall.