I started to compose a nice post in my head yesterday, and I figured I'd bang it out today. Then I realized it made a better short Pyramid article, so instead you're getting to see some of my minis.

It turns out I have two TSR rust monster minis.

By "turns out" I mean I knew that but most people probably did not.

It's a simple figure to paint the way I do - primer, black, color every "scale" with red starting from darkest hue to lightest, white on the eyes, metal and orange on the shield for rust, ink it for depth, seal it.

I now have a bunch of rust monster minis - two of this one, one plastic Bones insect one, and a few red plastic dinosaurs that are like 1/100 scale or so and may as well be rust monsters. Hey, they come in varieties. Why not? 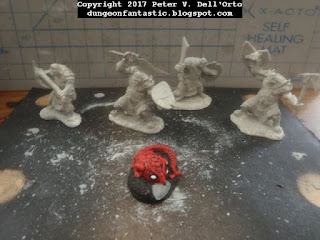 Behind the rust monster are the four big orcs from the Bones 3 set. They've been lightly coated with grey in preparation for a real paint job later. They'll appear in Felltower as Brute Orcs by next session.

Usually I'm a big fan of orcs with:

At the same time, though, the guys with big two-handed weapons like that guy on the left are nice to have. They are basically glass cannons - their friends can pound on you and they can hack open your heavy armor and really hurt you thanks to the kind of damage two-handed weapons can do in GURPS. So I'm starting to enjoy having them on the battlefield more and more because they add an element of "heavy weapons" support. In DF, even the mail-armored orcs with shields and swords are fodder, so why not up their damage a smidge (or maybe even 2-3 smidges) and take the chance they'll hit?

I will get my trade list of Bones 3 stuff up soon - the weapon sprues almost for sure, a few others. I just haven't had the time to dump everything on the floor and get deciding.
Posted by Peter D at 10:13 AM