I like to highlight gaming material I really enjoyed here on Dungeon Fantastic.

The usual notes apply: I generally review things I like; the author of this book is my friend, my occasional co-author, and often my editor; I'm a big fan of GURPS in general and Sean's work in particular.

For more reviews, see my consolidated list of reviews. 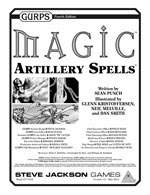 GURPS spells, it has been said, are tactical. They're small cost and small area, generally, and don't quite rise to the level of AD&D's Fireball or the Vaccum and Death Cloud spells of Rolemaster. Artillery spells goes a way towards addressing that. In typical Sean Punch fashion, this book doesn't re-write the rules, but rather expands them and shows you what fully rules-compatible ways you have available to expand your magical options.

The book opens with a definition of Artillery spells, and a set of guidelines for making your own. It addresses fuzzy issues like DR-ignoring spells, resistance, damage type, design so spells are mass-killers but not boss-killers (you want to sweep aside the Evil King's throne room full of guards, not dump a one-shot kill spell on the Evil King - for that, you want Death Spells Boxes address counter-measures, defenses/resistances, and how to drop these spells into an existing campaign. Each and every college addresses the issue of higher-than-normal Magery, as well - specific to these spells and how to retro-improve existing spells.

The bulk of the text is dedicated to actual artillery spells. Like Death Spells, Artillery Spells expands on a specific class of spells - spells that damage multiple foes at the same time. Also like Death Spells, Sean Punch takes a broad look at the concept and makes each spell interesting and clever. They aren't all just "As Explosive Fireball, only with a different damage type!" or only Area or only Missile spells.

There is even a Melee spell, which is "artillery" only in the way damage keeps passing on from one foe to another. All colleges get some mass-attack spells, including Enchantment (Doom Wish) and even Healing (Disinfect). Colleges better suited to attack spells get more, but none are excluded. Some are a stretch, but not much - even Healing builds off of previous examples of potentially harmful "healing" spells.

Some are fairly complicated in play, but interesting enough to be worth it - for example, Creeping Plague, or Slasher. The first creates an ever-green swarm of deadly bugs, which can be stamped out but only under certain circumstances; the second sends weapons out to chop and slash and slay (and results are somewhat weapon-dependent.) Others are quite simple but fill important gaps in GURPS Magic - Cloud of Doom is a much better match for AD&D's Cloudkill than Stench is, for example, and Chain Lightning was long needed. (FWIW, I'd created my own version of that spell for an earlier campaign. Sean Punch's version is much cleaner, and clearer, but operates much as I'd previously tried out.) Decades-old gaming tropes like the broken wizard's staff that explodes (like my favorite, the Staff of the Magi) are covered as well - here by Vengeful Staff.

Overall: The book is well worth the $8 if you feel like GURPS spellcasters should be able to access more lethal large-area damage spells. It's a solid power boost but with commensurate cost to cast, and thus balanced to the rest of GURPS. Highly recommended, especially for Dungeon Fantasy GMs.
Posted by Peter D at 10:21 PM