Why the Fiend Folio is awesome

I originally intended to post something else today, but let's stay on the theme with monsters.

So there is this Google+ thread (partly) slamming the AD&D Fiend Folio.

I had to weigh in.

I love that book to death.

It was either the 1st or 2nd AD&D book I owned, either right before or right after the DMG. I paid $12 for it ($15 for the DMG) at Jamesway in north-west NJ. That was a fortune back then.

It goes back to the guys who taught me how to run D&D. They had both books, and all I got to see of them was the pictures. And that cover picture with the Githyanki seared itself into my brain. I remember the older brother of the pair who taught me had a paper route, and we had to go around and collect between him running me through B2 and then him starting a new adventure. I sat in the car, thinking the whole time of that blue cover with that cool monster on the cover.

THAT is why I plunked down money on the FF before I bought the Monster Manual. I even had to ask my uncle to show me what a Mind Flayer was so I could understand the Githyanki's background. Damn, they were cool. That Emmanuel cover, and those Russ Nicholson inside pictures.

It's full of cool monsters, lame monsters, and middle-grade monsters. I didn't know it at the time, but it's mostly a collection of monsters from White Dwarf either as-is or reworked for the Fiend Folio. White Dwarf was, like Judges Guild stuff, a white elephant in early 80s NJ game shops.

I've used a lot of monsters from the Fiend Folio in my games. Just at a quick glance, I've used 76 different monsters (or monster sub-types) in play out of the 174 monsters (by my count). That's not bad. A half-dozen or more have already appear in my current game, too.

That book isn't full of must-use monsters - it has some real oddballs, and really special case monsters, and ones I'd never use - but I used as many as I could and I love the ones I used. It's got some real personality. It turned me to reading Charles Stross and even George R. R. Martin, too. It inspired a lot of play, a lot of fun, and a lot of daydreams that led to play and led to fun.

It's one of my favorite books. Partly nostalgia, partly continuing use. It's a book that made a real impact on my life, and which still influences my play. I, to this day, try to impart some of the wondrous impact that blue, black, and yellow-brown cover had on me as a gamer.


Editing later: I said on that thread I linked to that I colored some pictures in. So here are some of the pictures I "improved" as a kid. 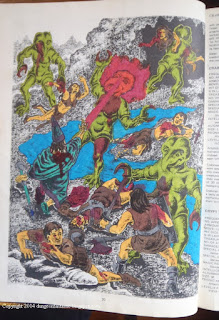 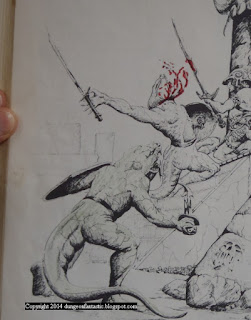 Flames on the glowing swords of the Githyanki: 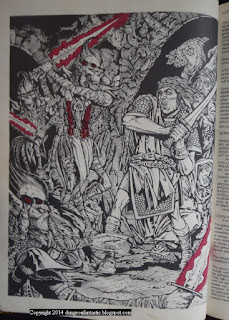 And my battered original. I peeled off the "United States" sticker from the bottom right-hand corner. I can't recall now why I stuck one there. 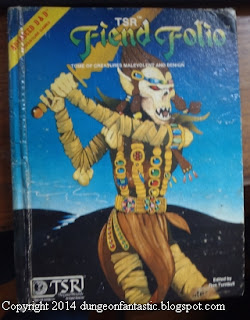