One of the entries in GURPS Martial Arts is Kachin Bando, and it mentions and breaks out Lethwei. This has its own history behind it, as I found an article written by Phil Dunlap on Kachin Bando in Thomas Green's Encyclopedia of the Martial Arts and decided to find out more. Later I'd find out Phil lived close to me, and I ended up invited to train at his school. To this day I still train with the style he taught me.

Recently he posted links to some videos of Lethwei fights.

You can see in the amateur/youth matches that it doesn't take more than a single good blow - or a short, sharp series of lesser blows - to end these fights. The loser isn't - generally - being knocked out, but is quickly being made unable to continue. You can see they're much more extended in the pro fights that are up on that Youtube channel, but they match the same basic fury - quick exchanges of blows, real damage done, and a rapid decline in combat power (IOW, a death spiral.)

The attacks are close to all-out, and aren't aimed at scoring points but rather at finishing the fight in a single strike or combo, which is why I wrote this about Kachin Bando:

Feints aren't common, while full-bore attacks are; a Committed Attack (Strong) or even All-Out Attack (Strong) with a punch, kick, or Knee Strike is a favorite way to knock out the enemy. Defenses are similarly hard: the Bando man likes to use Jam against kicks and Aggressive Parry (often with the elbow) to stop punches.
- GURPS Martial Arts, p. 152 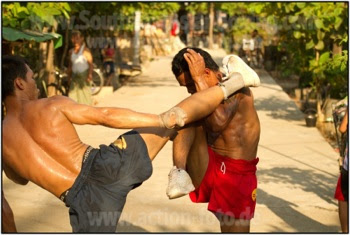 In the videos you will see a lot of Committed Attack (Strong) and All-Out Attack (Strong), and quite a number of elbows, head kicks, and elbows used to defend. Head Butts abound, too.

These guys take a lot of punishment and just keep coming.

Mikio kicked the stunned Burmese fighter in the spine and bounced his face off the cage. The man fell with a groan.
Reeves smashed his knuckles into his little opponent's nose with little effect. "Don't these guys stay down?" The little man shook it off with a glazed-eye smile, and his fallen twin again crawled to his feet. Reeves rolled his eyes. "They're like zombies!"
- Blade of Dishonor

Realistically, unexpected, non-sporting match fights tend to end quickly, usually with one person finding out the hard way that the other person is a fighter. But fighter vs. fighter, they last longer. Letting combat sports athletes buy Damage Resistance (Tough Skin), max out their HP, pick up Hard to Subdue (and more HT in general) and otherwise get more capacity to stand up to strikes is a good way to go. The list of Optional Traits for Kachin Bando lists those and more. It's not unrealistic - you do learn how to take a punch in combat sports, and you'll shrug off what would have put you out of the fight before you trained. Part of it is physical, but part of it is just expecting the damage and knowing that you're not out of it.

When I wrote up Kachin Bando and Lethwei, videos like this were extremely rare. But it's becoming more common to see them posted, and that's really nice. I'm glad to see that what I wrote based on my training and interviewing my coach and former pro Lethwei fighter came out so well compared to the videos going up now. I figured I'd share and show why the styles are written up the way they are.

And if you want to see how styles vary, there are a lot of videos of Muay Thai and Lethwei trained competitors fighting each other. You can get a good look at the different aggressiveness, the different kicking styles and standing hand positioning styles, and so on, by watching a number of those matches.
Posted by Peter D at 8:07 AM