Last night, I was able to make a guest appearance in Ken Harrison's Montporte megadungeon campaign. This was a treat for me on a lot of levels - playing with people I knew but hadn't gamed with, playing in a campaign I readily read the summaries of, and playing D&D 5th edition.

The Montporte guys play on Mondays, but my Mondays are only very rarely free evenings, but someday I hope to make the trek down into the dungeon again. We figured it was sweeps week, hence the guest star.

To make things easier, I eased into the chair of Douglas Cole and ran Nosphryc Azurecoat, his human fighter. That's me, a human fighter for a change.


We started in the depths of Montporte.


While we were resting, we heard screams from north of us. We investigated, not the least of which was because our goal was to return some gnomes home to the west, and the stairs down and west were north and east of us.

We reached an intersection, and found two messily gutted hobgoblins, with blood trails leading east and up some stairs. We discussed the matter while Luven checked for gold teeth and swallowed treasure. We decided the blood trails weren't "survivor crawling off" but "blood-drenched victor walking off, munching on hobgoblin bits." I pushed to go down the stairs - fight a monster, or continue the quest?

We went with continue the quest.

We headed down the stairs. These weren't any minor stairs, but rather 14 miles of stairs. Part of the way down (maybe halfway?) we met five humanoids coming up the other way. They were yellowish but with pointy ears. A female stepped out and held out her open hands ("Spellcaster!" we goaned. "Spellcaster monk!" I claimed.) The pogs for them looked suspiciously githyanki like.

They were githzerai. They spoke oddly, but in a friendly manner, and we were able to parley for information pretty much by being open with what we knew about a friend of ours (an elf mushroom farmer on level 2) that they wanted to consult with. They told us about Ben, who waited below near the "stone folk," and that the gnomes lived below. Nice! Progress.

After some more friendly chatter, we let them pass and continued down.

At the bottom was a gigantic forest with a black path, odd-colored mossy "grass," tangerine trees, marmalade skies, the whole bit. It looked like a Dr. Seuss dreamworld. Dwelling there was Big Ben, a 7' 300+ pound human with a giant axe and a posse of blink dogs, who spoke right friendly like and with a strong Authentic Frontier Gibberish accent.

Long story short, he was friendly, as long as we didn't break his rules (the expected usual ones) and also didn't go up to the Big House (where his wife lives). He brought us food - "fruit," mushroom dishes, lots of pork - yes, pork. We ate up, lead by Nosphryc, because friends do that to their friend's PC.

There were two cabins we could stay in. Ominously, there were filled with garlic, provided with stakes, and easy to long very strongly. Why? Vampires. Don't let anyone in who isn't me, Ben warned. Also, there are hobgoblins and trolls around, and he'd be mighty obliged if we killed any. We said we would, because we'd do that anyway.

In the "morning" we ate up, having bacon and lots of assorted mushroom dishes again. He warned us about green slime, black sticky moss, and not killing anything that didn't kill us first. Mostly to avoid upsetting the "Stone Folk" - stone giants. Somewhere in here, we ended up with Lucky the one-eyed, three-legged blink dog (aka Wink Dog.)

We headed north and followed the path.

How big is Montporte? It contains a hexcrawl. 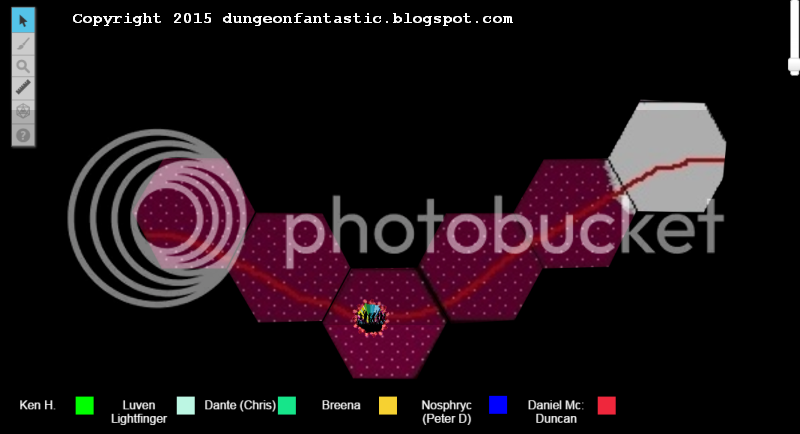 As we walked, we saw glowing lights in the distance. Those lights turned out to be giant cave dwelling fire boars. 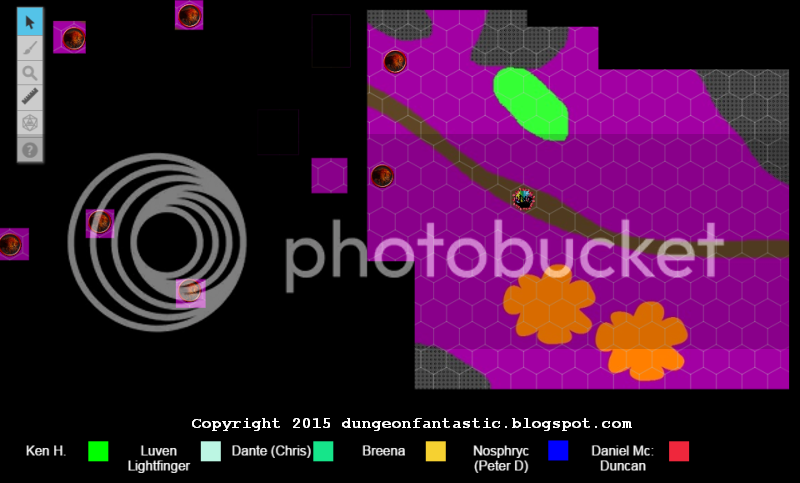 Monteport Country Club. Mind the green slime pits - that's a one stroke penalty and your friends have to burn the slime off of you.

We did our best to avoid conflict with them, but the ornery bastards kept advancing on us.

Luvan decided to lure them off, and ran across the open fields. Many of the boars followed, but not all. One of those that followed gored Luvan for 26 damage (ouch!), and a pair rushed the party. Nosphryc nailed one of the ones on Luvan with an arrow (I figured, Doug likes to fire into melee), but then the two boars reached us. We engaged. A few glaive strikes bothered one, but the real turning point was when our ninja rogue got behind them and went work backstabbing them. Still, one of them managed to breathe fire on one of our party before the rest of us cut the pair down with a couple rounds of melee. In a nice touch, once they die their fire cooks themselves, so we had roast pork in front of us.

Meanwhile Luvan kept running around, chased by boars and presumably humming The Benny Hill Show theme. He cunningly led them back to a 10' thick strip of black moss, jumped it, and then created an illusion of himself in the middle. The boars - most of them, anyway - charged. The ones that did were stuck in the moss. They moved around, but slowly. 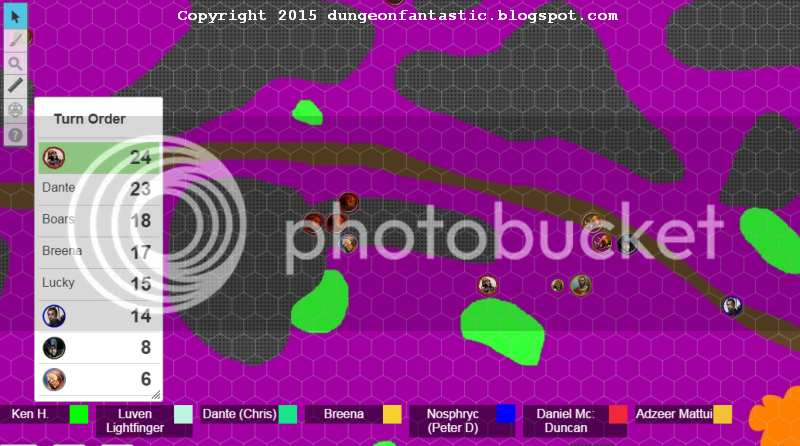 Deciding it was pushing things to finish them off, we hurried down the path.


We finished up after finding a fork in the path.

- I didn't roll a single die until Initiative. Not a bad thing, just a thing.

- Monteport is seriously big. We ended up 42 miles deeper than whenever they were teleported to a while back. I need to embiggen my megadungeon.

- Montporte really feels like a mystic wonderland. Nothing seem arbitrary so much as just wondrous and odd. I liked that.

- Roll20 is quite powerful when you've got all the options working, but still, I felt like I needed at least two screens so I could put my character sheet off to the side. I'd call it up, click on a roll, then click back to see what the heck I rolled.

Overall I had a great time, and I was glad to be in on a session that made direct, tangible progress towards fulfilling the quest.
Posted by Peter D at 8:25 PM