Over on Wizard's website, they have a Village of Hommlet walkthough and an interesting look back at T1-4 and its successors. 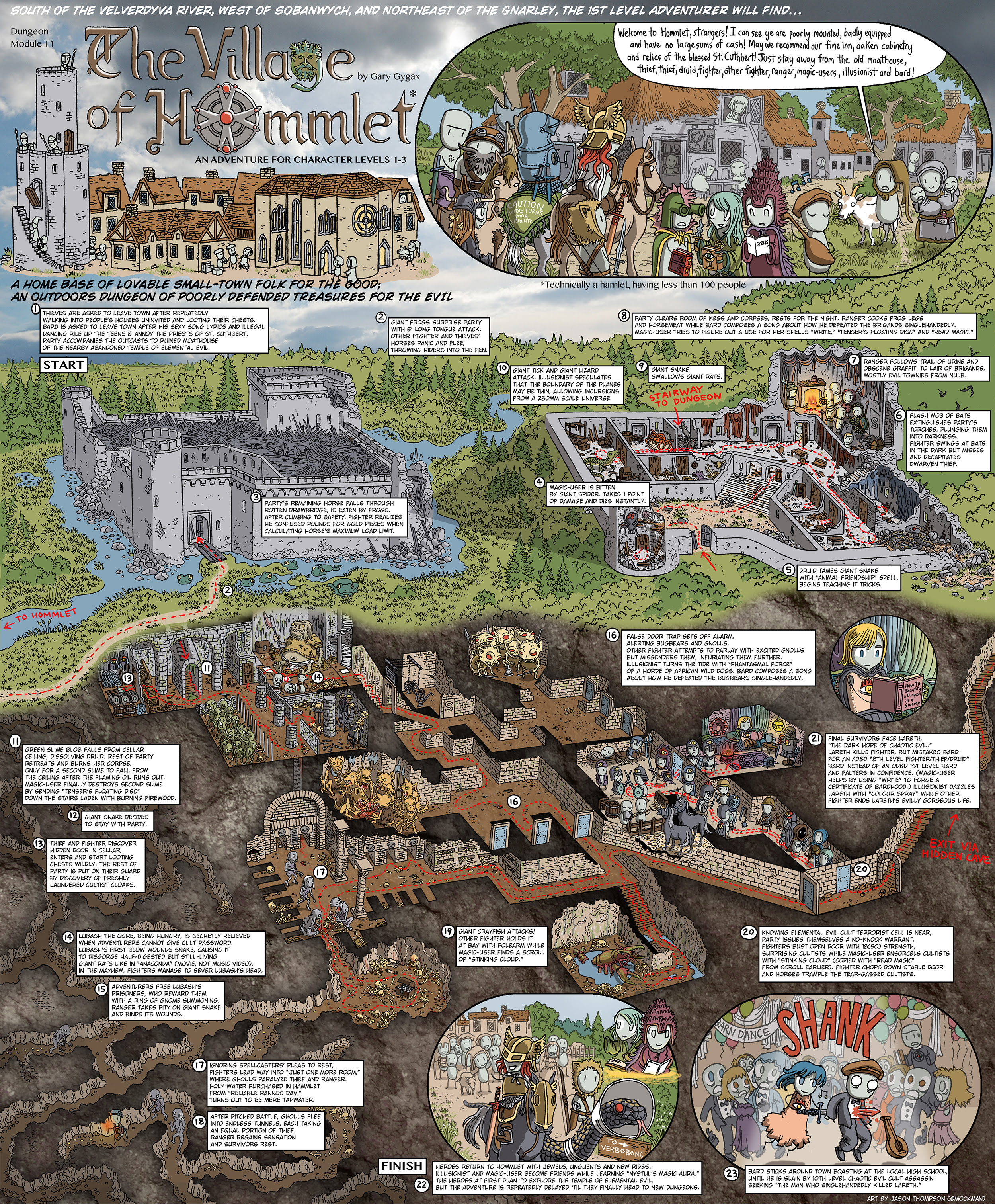 And the history of the various versions of the Temple of Elemental Evil:

The Return of Elemental Evil

Its interesting how it all got changed around as ideas were purposed elsewhere, sometimes to really good effect. I have to wonder, what the temple that Rob Kuntz apparently solo'd with his guy was like compared to T1-4. Still, what they put out in print is what I ended up playing, so that's the T1-4 that's of the most interest to me personally.

I used T1 a lot back in my early gaming days, since it was an official AD&D module (not kiddie D&D like B2!)

As I think I've said before, we didn't spend much time in Hommlet, itself. It was way, way, way too detailed for how we handled town back in those days. And now, in my DF days. People would go to the Inn of the Welcome Wench and order off the menu, argue prices, maybe get into fights, and then never come back to town again. The detail on that town was wasted. Nevermind my tastes being more to towns and cities than to dinky little villages.

The moathouse was more interesting, although it's bizarrely packed full of a lot of monsters for such a tiny space. Nowadays I'd feel it was overpopulated with half the residents. Anyway,the player would usually lose a PC or two fighting the bandits, explore the downstairs for a while, and then die fight Lareth and his cronies. I don't remember anyone clearing the place, offhand. Some came and then left. Many encounters I know by heart (everyone fought those ghouls and bandits!) but others, like the crayfish, never once came up in play.

T1-4, though, we had some stories there. I had that for my high school Unearthed Arcana-era game. The PCs started raiding it as a group - the Paladin was instrumental in clearing the upper works, with his followers in tow. One player repeatedly raided levels one and two - mostly two - with hired henchmen and hirelings. They died in droves, but he (with his fighter, Tomas deCon) eventually cleared much of the second level. The rest of the group joined in for a big fight on level three, where most of the remaining temple folks were slain.

They never freed Zuggotmoy, or even broke down a single pair of the doors - they knew well enough to leave them alone. Same with the side pocket plains - lots of detail on them, but no one went. Probably because they gave the impression of being generate-as-you-go spaces instead of places of singular interest.

Pretty much, they killed the active cultists and factions to a man (or a monster), and then left the place alone. At least that's how I remember it - unless some vague recall of Paladin vs. Demon is from that, which is possible. The paladin could have solo killed Zuggotmoy in her weakest state. If he did, it didn't make much more than a vague impression.

(Actually, I have a stray memory of someone getting trampled by Zuggotmoy, so they may have gotten after her and killed her. Maybe my remaining player from those days remembers.)
Posted by Peter D at 10:52 AM