Although this is mostly a fantasy gaming blog, model tanks and painting the same are gaming to me - and this is primarily a gaming blog. And a little while back, I mentioned I was looking for a nice King Tiger tank model.

So I did find a King Tiger after all.

It was reasonably priced on Amazon.com, from a company called Trumpeter. Production turret (aka the Henschel turret), Zimmerit coating. I think that means I can't paint it Bulge-era, because I have pictures of Tiger IIs from that operation and they don't seem to have Zimmerit.

I have a bad habit of getting things to build or paint and then putting them away. So this one hit my desk and I immediately starting putting the road wheels together. Before I knew it, I'd gotten most of the tank completed.

One nice thing about the internet is that I hit a snag attaching something to the back of the Tiger. I honestly wasn't sure what it was, and it wasn't clear from the instructions which way to face it (there were two choices, depending on how you hold it.) So I simply looked for full-size pictures of the back of a Tiger II. Voila:

Aha, it's a jack! I glued that sucker right on.

And I managed to bang out the rest of the model today, having done half yesterday (the day it arrived), and left it all to dry.


The treads were tricky, though, since none of the glues I had seemed to work. Plus, they are just short enough you need to stretch them over the tracks. That's bad if you want them to hang on top and run across the top of the road wheels. So I followed this tutorial to put them on:

The only thing is, since the armor skirts cover the top of the track, I fed the closing halves into the top part, glued them, and held them down with toothpicks until they dried as a unit. It was tough because one of the bogey wheels was bent and I slightly mis-aligned a toothed wheel. But it worked well enough, and you can't tell unless I point it out. 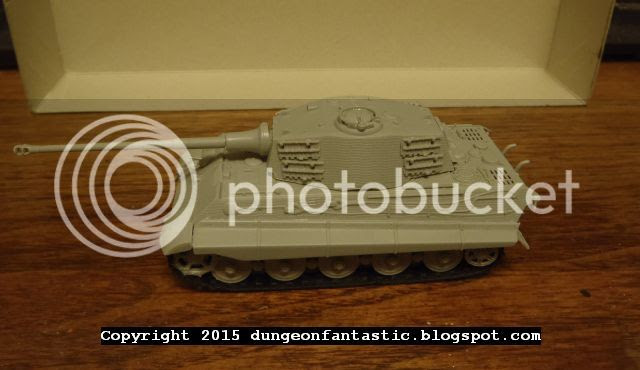 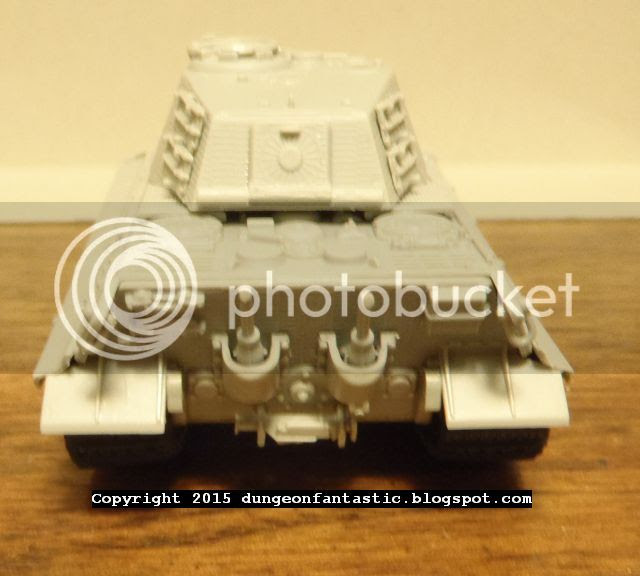 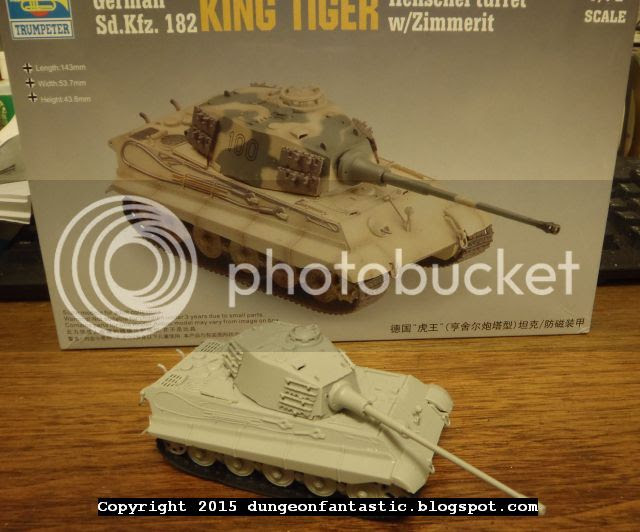 It's looking good. I'll try to figure out how to paint it - probably just duplicate the paint scheme from an intact real one, or if I can find a good color photo of one from WWII I'll copy that.


I probably should have primed it and painted it and then put the treads on, then the side guards, but I couldn't see how. I may just have to be very careful and be ready to remove paint if I get it on the treads.


This picture shows why I say I won't use these with my fantasy guys. Even if I had the inclination, it's too small. A real Tiger II is more than 10' tall. I posed some actual 1/72 scale humans with it so you can see what I mean. It's just not intimidating if a 88mm/L71 gun is less than twice the length of the wizard's staff. 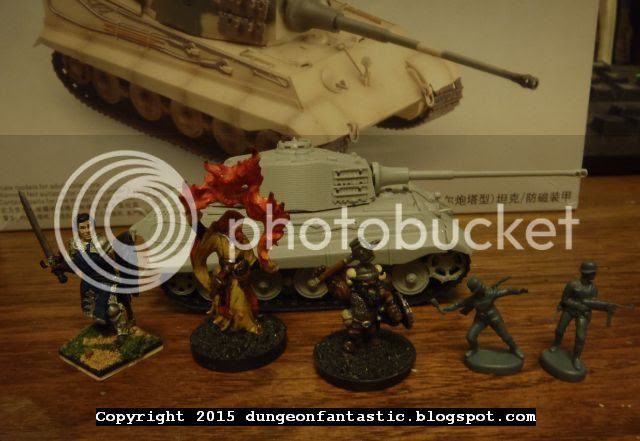 This is actually the first complete hard plastic model I've ever done, that I can remember. I did snap-tight models in the past, and I'd get ship models and put the main bits together and play with them. But I never did fully assemble a a model properly. I have some partly-done ones I need to finish (next up, perhaps, is an Elefant, but I may buy treads for it to avoid assembling track link by link.) I had a lot of confidence, though, thanks to all of the Warhammer models I've put together for props in my games.