As usual I like to take a look back at my year in gaming.

I ran 14 sessions of Dungeon Fantasy this year. That's down from last year, but a lot of work, travel, and holidays fell on Sundays this year. Also, we played more Gamma Terra (see below) so I'm satisfied we got in a good amount of gaming. 2016 was our 5th calendar year of gaming in the same campaign.

We had eight different players involved this year, with six of them being very regular and two being occasional. The length of the sessions is tough for some people, but two guys come in from out of state so one eight-hour session beats weekly two-three hour sessions.

In the game itself, the most satisfying for me as the GM was that the PCs started to fight the orcs instead of just worry about what happens if they fight the orcs. That, and finding the Lost City gate and another as yet undeciphered gate. Gates are a big part of the campaign plan, and I hadn't really expected the PCs to take as long as they did to discover them. Hopefully what's beyond them will be an interesting challenge for them.

I didn't get to run that playtest I mentioned on the blog, though. We ended up with scheduling conflicts meaning I'd get one player, possibly two, and I needed four or more. So I cancelled it and we moved on. It happens.

We played four sessions of Gamma Terra this year.

We cleaned up a big plot arc - dealing with the Ironmen in Boomtown, restarting a nuclear reactor, recharging our Warbot Sweaty, and scoping out the best game map I've ever had the privilege of actually using.

It's been a very enjoyable and satisfying game. Challenging, but we get to play with guns and strange technology and are rewarded for taking appropriate risks. The game's arc is pushing us towards playing Harvests & Homesteads but I'm pushing hard for keeping that as a backdrop for butt-kicking.

I also got to play two sessions of playtests for Douglas Cole's Dragon Heresy project. I was in one session while I was in Japan, which was really intersting - Skyping from halfway around the globe and killing kobolds. Most enjoyable for me was getting to play with Vic and Greg, who I've GMed for in GURPS. I drag people I know into games I play in because I want to share the fun and get to play with my players.

All together, this was 20 sessions of gaming for me this year. Not bad. I hear the B-Team is getting back together, so hopefully there will be more. I do expect a lot of busy Sundays, though, so we'll see if we actually get to play more DF this year.

I managed to get out three Pyramid articles - two post-apocalyptic ones and one GM advice for Dungeon Fantasy. Since I play post-apoc and run DF, this doesn't seem out of line. I wrote some blog posts I rather liked and I kept my usual writing/posting pace up.

I also had another GURPS book published - GURPS Dungeon Fantasy Monsters 3: Born of Myth & Magic. I'm quite pleased with how that came out. It sold pretty well as the year closed out, too. 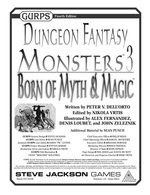 I started another writing project near the end of the year. And I have been bugging someone about another game project I'd like to do, if it's feasible. "Feasible" meaning "easy for me."

Oh, and some of my prior writing was included in the Dungeon Fantasy Roleplaying Game boxed set rulebooks. So I've got that going for me.

I played a lot of Darklands, played through the Designer's Cut of Wasteland 2 for a while (Assault Rifles still rule although they made other stuff suck less; combats are still either boring or blatantly unfair and boring), and played the heck out of Borderlands 2 for I'm not sure how many years running. I'm still not bored with that game. My current goal is to get Max Power, my Commando, to max out his level in the game. Because, you know, blowing up cartoony bad guys is fun. I picked up Sam & Max Hit the Road but haven't really played it much yet. Oh, and I played some Europa Universalis: Rome Gold but it's crash-prone once you get big.

A couple things I noticed. If I'm on the fence about a game, the sequel is right out. I backed Wasteland 2 on the strength of Fallout, but I skipped Wasteland 3 on the disappointments of 2. That's a lesson for my own games - PCs won't willingly return to a place that sucks the first time they go. You can't ensure you'll get a second chance if you don't impress on the first chance. So use your ideas right away and don't hold back awesome for later.

Another is that old-school games are easily derailed by real-life issues. I played a lot of Darklands going up into a vacation. I played a little on vacation itself. But then I was too busy to play for a month or so. By the time I got back to it I couldn't make sense of my notes, remember where the next's witches coven was to be, what I'd gathered in terms of reagents, who owed me money, etc. etc. I'd essentially need to start playing and give up a lot of the work I did for sheer lack of in-game tracking. This tells me that an important part of tabletop gaming is the ease with which players can retrieve knowledge of what they've done. I'm not as modern-game friendly when it comes to tracking done/not done or been there/haven't been there, but I do have summaries and lots of tracking posts up on this blog. I keep updated character sheets, spell modifications, rumors heard lists, etc. on a shared web drive. The less accessible this information is, the more if feels like wasted work and doing the same work twice - and that will drive down enthusiasm. I put a premium on player's knowledge in my game but I make all of the in-game information as accessible as I can.

And crash bugs kill game play enthusiasm. Totally kill it. When "one more turn!" becomes "those last 50 turns over again, maybe it won't crash this time!" I basically stop playing.

Yes, I did buy more minis than I painted, painted more minis than I sold off, and otherwise put off the PITA that is selling my old minis on eBay. Shush, I like minis. I'm especially proud of the dark elves I converted into foes for Felltower, and a few pieces that came out great but need to wait until the PCs stumble across them.

Some I've shown, like this orc chief that came out better than I'd hoped it would.

I do need to list my Ogre minis on eBay but listing things on eBay has gotten to be a real drag if you're just an occasional seller.

I'm hoping to get in about the same amount of gaming, plus hopefully some extra sessions. I'd like to get at least 2-3 Pyramid articles and another GURPS book out. We'll see how that goes. Overall, I'm pleased with the pace I'm on in my hobby and I'd like to keep it up.
Posted by Peter D at 1:00 PM