So we played AD&D yesterday. We've been planning this for a while, and originally scheduled in March but had to roll it back due to scheduling concerns. Even after doing that we lost 3/8ths of the planned group due to scheduling issues and cascading problems. In my Felltower game, this is a non-issue. In White Plume Mountain, it was more significant - we were doing a one-shot or two-shot, not a campaign. 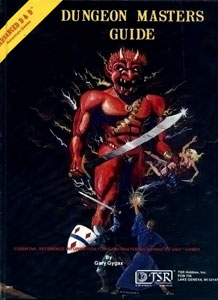 When the idea came up to take a session (possibly two) and play White Plume Mountain, as-written, I had a couple of ideas:

- run it with AD&D 1st edition

I wrote both ideas in an email and hit send, but honestly, by the time I hit send I knew the answer was "AD&D." Why hand out copies of S&W, explain the differences, re-calculate the ACs of monsters for Ascending AC (or point out how to do descending AC in S&W), re-do saves, re-do monster stats, etc. when we could just play AD&D? Why go retro-clone when retro is sitting right there?

Plus, as I've said a few times, AD&D is my native gaming language. I grew up with it. It wouldn't be too hard to get back into it. Just a refresher on how the system works and I'd be good to go.

It wasn't exactly that simple.

The AD&D DUNGEON MASTERS GUIDE isn't exactly laid out or written with quick reference in mind. Rules are buried in all sorts of places. Pages in the PLAYERS HANDBOOK refer to things ahead sometimes and to previous things other times - and details for something you choose on one page are often on another. The index for the PHB is in the DMG, and entries in the TOC and the Index aren't always taking you to that specific information you need.

It's kind of a mess. Good stuff, and it generally works, but it's a mess. It's like finding information on someone else's cluttered desk.

I just reveled in it. Any weirdness, oddness, or silliness that came up I generally just said, "Like it says in the book."

It took a while to make sure I read all the things I needed to read, and I made sure to look things up instead of assume I remembered them. I read every monster and spell and magic item in the book. Re-read the module a few times in order and out of order. I made note sheets and crib sheets for magical items in the party. I put in my homework.

Because much in WPM rides on specific notions being true that are not in GURPS. Most foes not using magic - that would be a more trivial issue in GURPS. Cheap-and-easy buff spells ("We just cast Levitation and Resist Fire on everyone and then go down the hall.") Area-changing spells. And fights with terribly serious consequences for being hit yet which lopsidedly favor numbers. None of these really would give the same feel. Things would have the same name, but lacking "Should we use out one Fireball spell here?" it wouldn't be quite the same. Take that from someone who routinely converts and plunders AD&D modules for GURPS - I don't think WPM would match the feeling I wanted to get back if I'd done with 3d6 instead of 1d20.

Why no Unearthed Arcana?

Simply put, because S2 White Plume Mountain pre-dates Unearthed Arcana. Once you factor in d12 HP double-CON bonus barbarians, weapon specialization, higher expected stats across the board, routinely lower AC *(full plate, not plate mail), broad access to new spells not planned for in the dungeon's design, and race and class options greatly expanded, you get a different game. I'd need to sit down with WPM and modify it. More of certain monsters, since fighters would be expected to have at least 3/2 attacks, usually 2/1, and have +1 to +3 to hit on top of superior stats. Magic-Users would have access to a wider variety of damaging spells. We'd have cavaliers and their weapons of choice, barbarians with their intra-party issues and physical prowess, and races with special powers beyond what is in the PHB.

But it's all stuff that came after WPM. To make WPM challenging, I'd need to change it. I didn't want to change it, I wanted to run it as written.

On top of that, the players would have a very large variety of choices. Up from a handful of races and classes to a large variety. Lots of min-max choosing about weapon specialization. Which race are you, and which am I, and how will that work out if we play together?

So I kept the party back to where you'd start back when I started, with three books on hand - the PHB, the DMG, and the MONSTER MANUAL. It kept it simpler for all of us.

If I ever pull this kind of thing again with a post-Unearthed Arcana module, I'd absolutely break out UA and use it.

I'll go over these in another post, along with character generation.

But in short, I didn't change much.

- grappling/overbearing/pummeling in favor of a Dungeon Grappling-based system. It didn't come up in the first session.

- the aging rules. I dislike these because there is seemingly no base case - once you use these every character has to modify their stats based on current age, and what you rolled is never experienced in play unmodified.

- the Helmet rule. I just assumed people have helmets. That rule did point the way to how we were always supposed to handle split-AC monsters, though.

- random height and weight. I don't even think that's for PCs, anyway, but it could be. I didn't care.

- encumbrance. I mostly based it on armor encumbrance (DMG, p. 27) with modifiers.

- initiative. I used an OSRIC-influenced stripped down version that worked really well. Unlike back in the old days, I used segments and it played out better than I'd expected.

. . . and that's about it that I can remember changing. Everything else was by the book, even when it did weird stuff. Yes, we even checked for Keen Eared Individuals. No one made the roll.

How did it play?

Generally well. People adjusted right away to the quirks of AD&D. We did a lot of rules lookups, because as easily as I could make a ruling we all really wanted to know what it actually said. That made for a lot of fun, when we'd hit lines like, "Leather armor +1 is usable by those characters permitted to wear this form of armor." So those permitted to wear it can use it? Those not permitted, then, can't? Helpful. Heh. We chuckled a lot over the effects of Potions of Growth, how harsh ghoul paralyzation is (duration, uhm, never specified), the magic-item destroying Scroll of Protection from Magic, the oddly specifically aimed Wand of Negation - all things we hadn't had to deal with in many years.

At the same time, it could be hard to adjust completely. No defense rolls means taking damage is routine - but in AD&D, healing it isn't as simple as "time and energy" like in GURPS. A bad roll - like the guy who rolled minimum HP healed on a Cure Serious Wounds - can dramatically change your upcoming options. You can't expect a fighter to hold people off unless they keep missing (and Parrying is there, but not a very good choice),

AD&D is a good system. It has so many moving parts, though, and so many special cases with special rules, mixed resolution mechanisms, half-explained ideas mixed with overly-explained ones, etc. that it isn't exactly smooth and easy. Often important information is hidden in some corner - like what to do with the 2nd through sixth repeating 20 on a hit table, or the infamous helmet rule - yet profoundly impacts how the game is played. But still, it was a lot of fun. I remember what I miss about it, and some of what I don't.

It had been over 30 years for one player, over 25 for another, and probably around 20 or so for me since we'd last played AD&D. I'd played Swords & Wizardry online, and I guest starred in a single session of 1st edition AD&D back in the 90s (and probably rolled one die, once - it was a talk-heavy session of an ongoing game where the PCs had no immediate goal to accomplish). I hadn't GMed AD&D since my high school UA-era campaign. Yet it all went quite well. And it was enjoyable enough that in a few weeks we'll see if a fresh group of PCs can't reinforce the two survivors and retrieve Whelm and Wave and get them out of the dungeon.

I liked it enough that I might do this again after WPM, maybe with some other module I have that won't play with quite the same feel converted to GURPS.
Posted by Peter D at 3:13 PM