Weather in the Dungeon 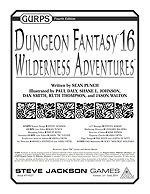 For reasons unclear to me, Dungeon Fantasy 2: Dungeons doesn't mention weather for dungeons. Let's fix that oversight. This is based on the rules in DF16, but weather is less changeable in the dungeon so the ranges have been modified. Weather in the dungeon is fairly stable; roll once per delve (for short delves), once per level (for large or mega-dungeons), once per area (for superdungeons), or once per 1d hours.

3-5 – Perfect. The tunnels are clear, the usually noisome corridors, creaky doors, damp air, etc. is absent. All Prospecting, Cartography, Tracking, and Perception rolls are at +1. Reduce lighting penalties by -1 out to the normal limits of the light source.

15-16 – Bad. Even dungeons have nasty weather. Drafts - natural and unnatural - abound and seem to blow into the delvers at all turns. The flagstones are slick in spots and rough in others, either naturally or due to mold, mildew, blood, and bits of grue (or actual bits of Grüs.) All Prospecting, Cartography, Tracking, and Perception rolls are at -1. Sound and smell-based Stealth and any Climbing rolls are penalized as well. Light sources are unnaturally dimmed from strange mists, flicker in the drafts, or just seem drained of brightness by the supernatural darkness around the delvers. Light sources project out to 2/3 of their usual distance.

17-18 – Dire. As above, but the dungeon is hostile to you in a seemingly personal way. Black or grey mists obscure vision, flagstones are slick or feel uneven or warped, drafts abound and occasional real winds blow down corridors. Travel speed is only 75% of usual (round down, and all footing is treated as Bad Footing - and normally bad footing has its penalties doubled. Light sources project out to only 1/2 of their usual distance, and double the penalties beyond that. All of the above skills are at -2.

During Dire weather, one additional side effect will occur. Choose one of the following or roll randomly:

1 - Supernatural Storms. The Mana (1-3), Sanctity (4-5), or purify of Nature (6) drops significantly. For either mana or sanctity, roll a further 1d, on a 1-5, the level drops by one. One a 6, the level drops by two levels. For nature, roll 1d and add that to the existing penalty for the surrounding area, or reduce the level to -5, whichever is worse.

2-5 - Monster Warping. During the weather event, monsters sometimes change . . . roll 1d. On a 1, add two prefixes to the monster (usually distorted, chaos, or berserker plus one other, or two of those); on a 2-4, add either chaos or distorted, on a 5-6 the monster is unchanged. Roll individual or for whole groups.

6 - Delver Warping. The delvers might warp - characters suffer 1d x -5 points worth of additional disadvantages. Choose any, but temporarily missing or crippled limbs, Delusions, Post-Combat Shakes, Wounded (a state which will automatically be visible to all foes), Unhealing, Magic Susceptibility, and so are are especially appropriate. When the weather event ends these go away completely - but the consequences of having adventured while having them will not!

Happy April Fools day. And if you think this isn't useable in play, and that I won't use it . . . then double April Fools on you!
Posted by Peter D at 4:01 AM