A session or so back, the PCs were menaced by some golems.

Here's one of them, with a weapon head swap (since the original broke off long ago): 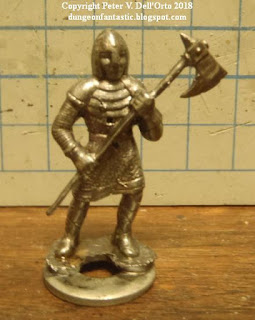 These guys are actually some plastic knights from some random bag of plastic men - knights in this case - that I had when I was a kid. Few survived, but those that did have become golems. All I did was spray-prime them, cover them with metallic paint, and then either just magic wash them or give them a rust-orange wash and then magic wash them. Simple, cheap, fun, and just the right size to be SM +1 menaces.

That guy also got a carpet staple in his chest, somehow, which I pried out. It just makes him look battle-damaged. Aim for the hole at -8, you can see how well that worked out for the delver who put that hole there!
Posted by Peter D at 9:42 PM