Here is a shot of the beholder from yesterday's game session: 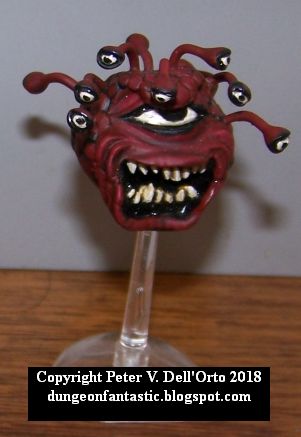 I traded some bat swarms for that flying base, too, because I didn't like the one the mini came with. I also remember putting the base in and then realizing was a mistake, so I had to remove it and drill a new hole.

The top and bottom halves didn't fit together, either. So I had to make a greenstuff connection, sculpt that into armor plates like the rest of the figure, and make sure it glued together well.

Remember way back when I was groaning about frosted minis?

This mini was one of the ones that frosted up, although it actually frosted up a year before that complaint - the beholder might have been the first one I had frost due to humidity. It took a major recovery job, and lots of re-painting, to get it back to this state.

This guy will see the tabletop again, but maybe not for a while. It took a horrible toll on the PCs, who were channeled into a killing zone where it could play its anti-magic ray and various eye rays on the party without retribution. Notice its order of attack, too - scouts first, then using its charmed ally to kill the cleric (who wasn't affected by the anti-magic ray), and then the wizard (so it could focus its attention elsewhere.) It was a spherical, hovering TPK.
Posted by Peter D at 10:57 AM