We've learned a lot of little things in Gamma Terra.

We don't know what day of the year it is, but we've been out of the bunker - we, the original five* - for 142 days. The additional troops have been out since a few weeks after that.**

We've hit a fairly bewildering variety of technology. It's a weird mix of 70s-vision future tech and modern visions of technology. Computers with giant disks and blades, plenty of keyboard interfaces with green-on-black displays, etc.

- Transport gates (which means my goal of getting into orbit isn't unrealistic, there must be a gate to an orbital weapons platform somewhere!)

- Will-powered lasers (not my favorites)

And 8 generations of androids.

So far we only know that the Bal'Kree have their own language, and some of us know some of it.

We haven't found much use for our other languages; we really need a Latin speaker, based on how much we find. We're hoping one of the new guys will speak it.***

Lots of races seem to speak their own languages. We got around in Boomtown thanks to a telepath and a 20th Homeland person.

- Purists - former 20th Homeland, now an army with an anti-mutant bent. Hillbilly being a mutant now doesn't endear this group to him.

- Restorationists - folks dedicated to restoring the wonder of the Ancients. Sometimes helpful.

- Army of the Bear - mutant animals who follow a mutated bear.

There are a half-dozen or so bunkers of the 20th Homeland. Many of them are in Purist territory and are the basis of the Purists.

Midden is the current name of Michigan, which the Bal'Kree say is from "Mitten" for the shape of the land. Michigan, really.

Bear Lake is north of the great forest, and north by a bit from where that Airbus was supposedly going to take us: 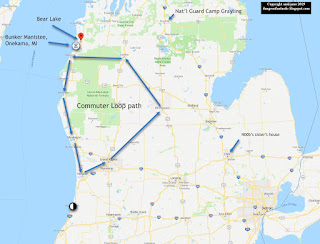 I'm sure I'm missing a lot of bits, but I may have to keep up a "Gamma Gazetteer" and this will make a good start.

*** One of our potential players studied Latin, so he may as well take it on his PC. I regret taking Spanish and not Japanese, if only because I speak way more Japanese personally and I like using that skill.
Posted by Peter D at 4:28 AM