I really need to get the rest of my GURPS 3e books out of storage, but I don't actually have room for them on my book shelves. One of the ones I need to get back out is this one: 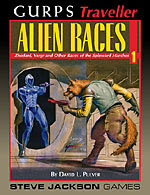 I want to read it after I finish re-reading this:

I recently got a copy from Noble Knight.

I had access to this back in the day, when I ran a two person campaign for one of my current players, and one of my former players. I can't put a finger on the year, but I was in High School, as that's when I first became friends with one of my current players. I think the copy of this book belonged to the player who ran a Vargr. For all I know, he sold the book (likely) and this is that exact book (unlikely, although it's happened before.)

When I've had a chance to re-read it completely, I'll do a review. I really, really like the Vargr. They're such an interesting race, and, like most Traveller races, they're both accessible and alien. That's a tough combo. The rules around them make it easier to run them as written than as men-in-suits.

I'm looking foreward to finishing a re-read and getting into making some Vargr Corsairs. And to be honest, having done graduate school work in Linguistics, I'm way more interested in the whole section on the Vargr language!

(I almost forgot - here's a rock opera about a genetically modified vargr! I wear my The Lord Weird Slough Feg "Traveller" t-shirt to Gamma Terra games sometimes.)
Posted by Peter D at 6:51 PM