I read the new DFRPG book, Monsters 2, cover to cover. What did I think? 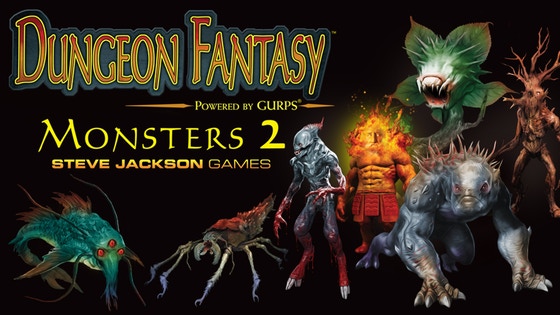 The latest DFRPG release is Monsters 2, which was Kickstarted a few months back. The book is a sequel to DFRPG Monsters, which was included in the Dungeon Fantasy Roleplaying Game boxed set.

The book contains 24 new monsters - new to GURPS DFRPG stats - plus many have multiple variations. These include some staple beings: giants, angels, striges (aka stirges or strix), chimera, killer trees. They also include some unique additions - blood-draining undead, demonic dragons, elemental humanoids (and elemental blends), killer plants, things that dwell between dimensions, and so on. They're written up by Sean "Dr. Kromm" Punch, who writes monsters that seem tough and mean to me, and I pride myself on playing on hard mode.

All of them get complete game stats, blurbs on how best to use those stats (tactically, but also to spark adventures), and writeups of what the stats mean when you use the monsters. Each monster comes with a full-color high-quality illustration, some adventure seeds, and enough information to back up their abilities with concrete in-game rulings.

Although some of the monsters already have had GURPS stats - giants and strix, for two examples - the DF/DFRPG level stats and excellent advice on how to use them is especially useful.

Overall: I'm impressed by what's included, and many of these monsters will see immediate use in my own Felltower campaign. Having only 24 monsters - admittedly some with multiple variations - is a bit disappointing. The two-page layout gives a lot of meat to the monsters but costs in overall quantity of monsters.