I know, I know - I've been cluttering up my blog with all sorts of posts about "dungeons" and "fantasy" stuff. Crazy. So I'm giving the people what they want - more updates on War in the East!

So, the rasputitsa came - the Fall season of mud.

I came just short of completely taking Lenningrad - one part of the city is still holding out. The muddy conditions even affects urban combat - I think that's a design issue with the game that'll certainly be revised in WITE2. So I lack the firepower to blast the Soviets out of that portion. Until I do, the Finns won't attack the Soviets past the line they're on.

I also fell just short of Moscow. I reached its suburbs - I was adjacent to the city's urban hexes - but as the weather called for mud I didn't want to get swamped in a massive Russian counterattack I pulled back. I had only a needle of penetration, anyway, and I couldn't crack the level 4 forts in the urban hexes. Forts range from 0-5 . . . 4 is formidable. You can see to the west of the city where I'd pushed in and was now pulling back.

South of the city I broke through, I could have effected a pocket had it been a month earlier. The Soviets have so many units in the area it's a slow to fight through, coupled with major and minor rivers and wooded terrain. Still, I took Bryansk. My units are all isolated as they're too far from the railheads for trucks to reach them. The only saving grace is the Soviet offensive operations are likely to fail, too. I just need to ensure I have an actual line - semi-isolated units out front can still be surrounding if the Soviets are willing to throw away men to do it. They are, so they will be. And the offensive penalties during rasputitsa means I cannot just do what I normally do - use my firepower to demolish the units trying.

Partisans are coming up in my rear, and I'm not sure they best way to deploy to keep them down.

In the south the Soviets are already pushing back as I close in on Rostov.

I blocked off the Crimea, but there is no way I have the firepower to punch through to it, and I need to hope the Romanians can hold the couple of hexes they hold.

It's a complete mess.

However, I think the mud ends in 3 turns (I'm playing with historical weather.)

Then I get a bit of hard ground to fight on as the blizzards roll in. I doubt I can take Moscow, but I'll consider a try if it seems possible. Stalingrad is too far - I couldn't drive there unopposed if the weather stays this way, nevermind fight my way there. All I'd really like at this point is to get a solid, defensible line that keeps my furthest major gains (Ryazan will be hard) and to seize Lenningrad. Opening up sea supply to the port, with the rails running from it, should help. Plus it'll shake loose von Manstein's panzers to be deployed . . . somewhere. It'll be interesting. I might get pushed, like the historical Axis, to go for a big blow in the South because the North is cemented in and the center is too damn hard to break.

Pictures - yeah, they're not pretty. It's the mud. For illustration I left on the "far from supply" and "isolated" toggles. Yellow is far from supply. Red is isolated. Yes, I outran my supply badly in the south . . . it's hard to keep the rail repair going forward and the railroads don't always run the way you'd hope. 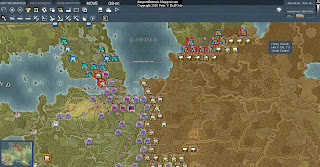 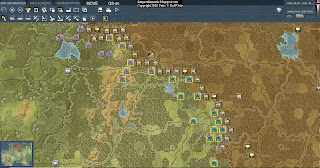 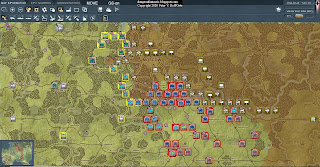 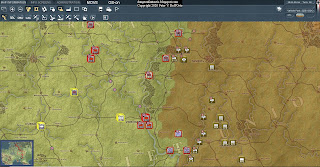 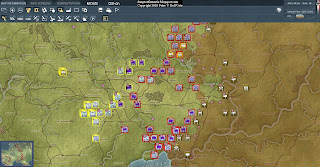