I'm pretty sure I own a good solid chunk of 1st edition Paranoia.

How I got all of this is a story in and of itself. Basically, someone who was given all of this, gave it to my sister, to give to me. The only thing I ever purchased is that 2nd edition Gamemaster's pack. So that's why so much is shrinkwrapped. Orcbusters was, too, but I eventually opened that. Part of me wants to keep these in a salable condition. Another part of me wants to open Yellow Clearance Black Box Blues because, well, John M. Ford. I remember interacting with him on the Pyramid message boards . . . such a great guy.

But here is what I have: 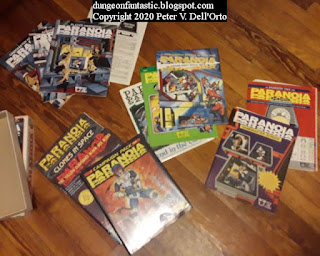 I'm absolutely going to run the game. I'm just not sure what adventure I'll use. Not Orcbusters - I want something without any fantasy to it, even spoof fantasy. The basic adventure is fine but might not work for 9-10 troubleshooters that I expect to have.

I will probably run this with the 1st edition Paranoia rules. GURPS would work, for sure . . . and be easier to run. But it would also be easier for the players to understand their relative skill levels and try to maximize them. That's no fun. It's better if they have no real clue how good or not they are. They'll find out. After all, a bunch of Red-clearance or Orange-clearance shlubs sure have no idea. Fear and ignorance! Ignorance and fear!
Posted by Peter D at 7:38 AM