In Gary Gygax's article "FIRST ADVENTURES IN DUNGEONEERING (by Gary Gygax, USA)," discussed here yesterday, I made this comment in the comments section:

"It's true, but the core idea for me is that you have a chance - to win by fighting, to win by outwitting, to evade by running. Since your options on all three are really level dependent, ultimately, it's really saying that balanced decisions about appropriate encounters are part of the basic job of the GM. It's not a numeric system like you'd find later for BECMI D&D, but it's still help up as a basic element of dungeon design. It's still on the continuum of balancing risk and reward and capabilities of the PCs that ends in scaled encountered."

Wait, what? BECMI had a system for balancing encounters?

Dragon #101 had an article by Frank Mentzer, author of the Basic, Expert, Companion, Master and Immortals D&D rules - the BECMI system. 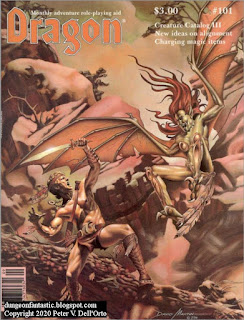 "Author’s note: The following was in-
cluded in the original manuscript for the
D&D® Master Set. It was, however,
thought by the editors to be too heavily
mathematic for easy use, and was replaced
by an alternate system. But I still like this
one, and use it in my own campaign —
though modified for AD&D® game use.)"

What followed is a mathematical system for balancing encounters for PCs.

The system took the Average Party Level and Total Party level into account, along with a % of that - from up to 20% of TPL (for an easy wandering encounter) to over 200% of TPL (extreme danger, run or die). You could/should also compare to the Average Party Level, with the same relative strength (from nuisance encounter - amusingly, the same term I use for such in my own games - to "extremely dangerous opponent."

You'd use the HD, HP, us a multiple based on the "Power Index" (number of *s next to their HD) to determine a numerical value, compare, and go from there.

Take these examples (column width not adjusted - this is just cut-and-paste):

Or maybe your guys are higher level?

So you want a minor hazard for your 4 PCs who average 34th level and total 132 levels (actually 132/4 = 33rd average level) - turns out 2-3 cloud giants will do, mathematically. #2 is "minor placed encounter" with a potentially 160 HP red dragon. You know you've hit the big time when math says dragons are minor fights.

It also has advice on using this on the fly to make an encounter match the PCs better on the fly - instead of changing die rolls, change the monsters. "I make up results regularly, to keep the game fun - and isn't that why we're all playing?"

I always think of that when I hear gripes about "balanced encounters." Making all of this a mathematical thing happened in print as early as September 1985. That's even before I stopped playing AD&D and moved fully on to Rolemaster and GURPS (and then just GURPS.) It's a workable system, too, if more mathematically heavy than other systems I've seen for balance. If you play a D&D-based system, by which I mean BECMI or B/X, this system works very smoothly. It might be worth a look if you can find Dragon #101.*


* I bought that Dragon Archive back in the day so I'm lucky, there.
Posted by Peter D at 1:53 PM