It's Friday, here are some posts I saw this week that I wanted to share.

- My book was unlocked, finally, in the PDF Challenge. So $3 gets you Dungeon Fantasy 21: Megadungeons and 11 more PDFs.

Throw an additional $96 into the pile and get $125 to spend in Backerkit for more GURPS stuff, such as:

- This caption made my whole day better: 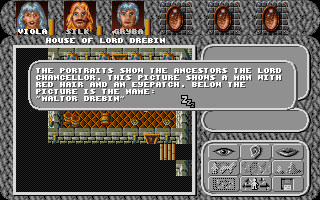 "I so hoped that one of the portraits would show his ancestor, Frank."

If you need me to explain Frank Drebin . . . you might have the wrong blog.

- A commenter named Vinemaple made a terrible, terrible pun of a "harmless" monster for his gaming. And I love it. Look out, it's a red lert! And a brown lert is a very different thing if you work in a building with a kiddie pool. Just saying.

- I still like treasure tables. Blog of Holding opines on which ones are good.

- I've been meaning to share this - I was toying around with this hoard generator and came up with an Apparatus of Kwalish. I've never used one in my game: 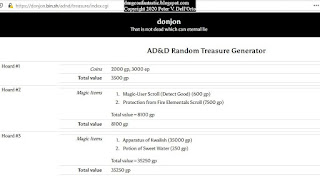 At least the scroll will help you keep fire elementals from burning it to pieces.

- Speaking of fire, the crew is not going through the "Icy Gate" on Sunday. One of the players most keen on going there is not going to be able to make it and joining in play might be very difficult. So they've pushed that off until next delve and are sorting between two options for Sunday - raiding the orcs overland, or investigating the Orichalcum doors with the key in tow (I ruled they could get it from Dryst, as a special case.)

- Editing later - if you want your bard to play some different musical instrument, try some of these - this is a film by The Hu, a Mongolian throat-singing metal band. The four main guys look like someone's PC portrait minus the swords.
Posted by Peter D at 3:15 PM