I actually completed Might and Magic I on Monday. I should have taken screenshots, but instead, for some reason, I just used my phone and took two snaps of the end.

The secret of the inner sanctum is that, well, you don't live on a world, you live in a vehicle. The world "VARN" is actually a V.A.R.N., an artificial environment. You know, where you can cast Meteor Swarm even though you live in a contained environment. Anyway. 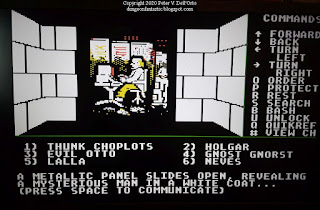 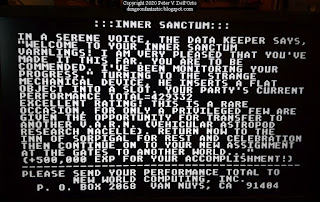 I love the bit about submitting my score to the company. I wonder what a good score is? I could have finished earlier, but I spent some time grinding because it was fun to do so once I got pretty strong. And I wanted to try and finish as much optional content as possible.

I can see why I never "figured out" the game when I played it in the past. You need to find lots of messages, many quest objects (easily sold or lost accidentally or stolen during encounters), what items are needed for quests aren't always specified . . . it's tough. I basically figured it out this time because I knew a lot going in, had spoilers from a guide or two, and I'm just more experienced at figuring out how to win games despite a lack of clues.

Still, it felt very random. I had to dig around and find the "diamond key" - you get it from the same place as a prior key, so I didn't think to check - and then find out you can just get to the final quest area with a spell anytime you want. Sigh.