I was far too busy today for a lot of writing - or any writing - but I did read a lot over the past couple of weeks. Here are some posts I hope you didn't miss.

- New GURPS Dungeon Fantasy release today: The Room. I know nothing about it to tell you that the landing page of that link won't tell you.

- Here is a fun post on ditching mental stats in a game: Player Skill Should Mean Dropping Int and Wis

- Got some spare change and want to play some minis? How about the Battle of Five Armies from The Hobbit? 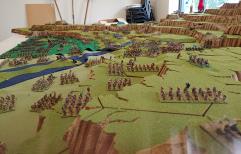 Complete Contents of this breathtaking display include:

- I've been reading the AD&D PHB cover to cover, line for line, in order. It's a refresher. I've never done that, although I've certainly read it all many times. Next is the DMG, although I am reading the relevant referenced spells in the DMG as I read them in the PHB. I don't think AD&D spells are poorly worded, but I do think the notes in the DMG belong more properly in the spells themselves to facilitate actual ease of play.

- This is a really thorough look at 1st edition AD&D regeneration. No, I'm not sure how I feel about Rings of Regeneration. Do you die and then come back, and lose a point of CON, or just never die? Do you roll System Shock, Resurrection Survival, or neither? Neither means you're effectively unkillable in many ways. Back in Rolemaster we used to call magic items like that "Most Potent." Did you find one yet?

I've thought of putting on in GURPS but I expect it would just get handed around during rests to bring everyone up to full HP without using any spells. I'd need to put some kind of "attunement" rule in place, or a delay, but then you lose out on the fun of jamming it on someone's finger to keep them from dying. And the former also means people say, "Can I have given my ring to (so-and-so) 6 days ago to have him attuned so he can use it this adventure?" Like anyone in their right mind would take the damn thing off when it keeps you immortal-ish.


I hope that keeps you in good posts for tonight . . . I'll try to get something more content-like tomorrow.


(Editing later - forgot one! Some delve-worthy forests from Bruce Heard!)
Posted by Peter D at 7:10 PM