This was my first actual RPG day, as far as I can remember.

They had about twice this, but I only took what I'd actually want to sit and read and potentially use. So I passed up a Twilight Imperium RPG book, a Zombiecide scenario book, some Star Trek stuff, some furry Red Shield looking RPG, etc. But I did get the last of that DCC adventure, lucky me!

And honestly, if there wasn't going to be two Goodman Games products on tap, I'd probably have skipped. I'm glad I didn't. 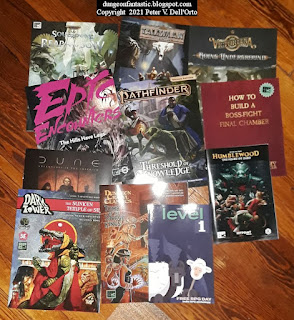 I checked the website and lo and behold, there was a game store in the same town as a relative of mine. Highlander Games. As I was in the area visiting, I stopped by the game store as well. In case that sounds suspicious, it wasn't - I had chores to do for my relative, and it was just luck that there is a game store nearby and I'd need to be nearby anyway to help out with heavy stuff.

So I went up and took a look. They have a lot of board games, Magic stuff, some minis - a lot of D&D stuff was sold out, including all the monsters, a pity that - and the Goodman Games 5e versions of the early edition stuff. If I didn't own TOEE I'd have been tempted to drop $100 on it, or a bit less on the Barrier Peaks update.

I didn't end up buying anything, but the store employee and I got into a discussion about Twilight Struggle, COIN games, and the upcoming Mr. President. Twilight Struggle was really tempting. Sooooo tempting. But it's hard to find an opponent/playing partner. Maybe, though, I'll go back and get it sometime.
Posted by Peter D at 6:11 PM