It's been a few years since I did one of these:

About time I do another.

This one is Junta. 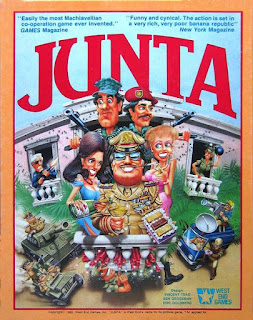 I've played it before. It's a fun concept. With the right group, the backstabbing and politicking could be really fun, like in a game of Diplomacy. The setting is interesting, too, with a poorly-run country topped with leaders out only for their own good.

Why I Probably Won't Play

Besides the usual lack of time to play board games?

When we played it, it just didn't play well with the group. Few people were willing to be really cutthroat with each other, and basically just amassed money until the game ended with victory to the one who managed to get the most. There weren't enough tradoffs made . . . it was just a race to victory. We get the same with Munchkin, with a last-turn race with everyone at level 8-9. With Junta, if you just try to amass currency for victory and no one really pushes to use it to set themselves up for more . . . it equally doesn't take advantage of the setting.

Why I Hold On To It

Mostly because I'd like to play it at some point. It's also one of those games that if I have, I may get to play - but I'd never buy it again. I like to flip through it now and again. Still . . . if I sold it, lost it, or traded it, it would sadly stay gone.
Posted by Peter D at 7:53 PM

Email ThisBlogThis!Share to TwitterShare to FacebookShare to Pinterest
Labels: board games