With that in mind, here is a screenshot of the stats of Robert Shaw's character from From Russia With Love from the James Bond 007 game from Victory Games - Donovan "Red" Grant.

I doubt I could ever run this game well, but man, I wish I could . . . and I'd love to play it run by a GM that really understood the genre well. 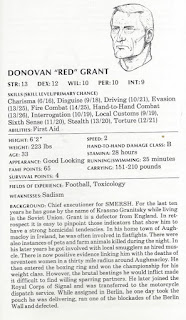