I've been musing about magic item placement in my DF game. Especially the really good stuff, like you'd find here: 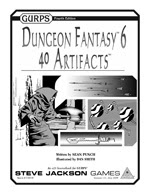 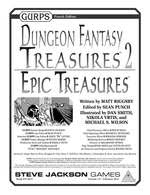 The best is found, not bought.

I allow the PCs to buy magic items in my DF game. I do this for a lot of reasons which aren't really germane, here. But I place much better magic items.

If you look at the items people have purchased, they're good. They've enchanted swords and I think even one bow with Puissance, they've enchanted armor so much we've had to limit what can be enchanted, they've picked up Cornucopia quivers, they've enchanted items with Iron Arm and ordered things with Missile Shield. I can't recall a wizard without the Staff spell on his trusty staff.

But they've found two legendary swords - the dragon-slaying sword Gram and a shortsword called The Razor. They took a powerful magical axe from a spectre's trove. They have a magical shield straight out of 40 Artifacts. They've discovered unique items of great power (such as a Bell of D'Abo) and a number of generic items of middling power. They've found some potions that don't appear in any books and which alchemists can't even strain to duplicate.

I could give them unlimited money and they won't be able to buy things to match what they've found - and not just because I limit some of the available enchantments. It's also because some of what they find has powers the generally known spells just don't allow for.

The real "why?" here is because I want delving, not shopping, to be the way to power. Yet I'd still like people to be able to shop and make their own choices about what magic to possess. And I'd like to choose what over-powered items are out there, not settle them with a ruling or an availability dice roll and crossing out some money off a character sheet. The best a wealthy man can purchase on the surface has nothing compared to the true power founds in the ruins, the depths, and the howling wilderness. Otherwise, why go?

Offensive is better than defense.

This is more of GM placement issue. I find it's better to give people more firepower than more defenses.

In my experience PCs, given a choice, will generally favor defense over offense. That's a logical approach - "not dying" is generally a passive power that helps every time you get hit, but offensive "kill stuff" powers are only useful when that's the margin of victory. DR 10 helps vs. everyone, but +3 to damage only helps if you can't kill the target without it.

But I find it's better to have glass cannons than tanks armed with pea-shooters. If you give the PCs too much defense, then you can end up with characters who can't really be killed off without firepower that will flatten everyone who lacks those defenses. Weak offensive foes are just chaff, not even fodder.

Offensive magic items just mean delvers can kill more. They aren't necessarily less vulnerable to foes, and they can't just have battles of attrition with their opponents.

This also means, especially in GURPS, that fights hinge a little more on tactical choices and offensive effort than on long slogs to see who fails first. Give out too much invulnerability or near-invulnerability to attacks and you either need to up the offense to match, or just have all fights become slow grinds.

So if the PCs can buy things, they'll err on the side of buying defense, so I don't want to compound it by given out massive amounts of defense.

I prefer to hand out magic items that feed into your abilities, not replace them. Especially if those abilities are central to your character.

I tend to give out magic items that boost spells instead of cast them for free.

I tend to give out weapons that boost damage, not ones that fight for you.

I prefer magic ropes that boost your climbing, not rings of Levitation.

In other words, I like boosters, not replacers. This isn't to say I don't give out items which do these things. But I'm less likely to hand out a magic portal that bypasses doors than a magic key that undoes non-magic-proofed locks. I'm more likely to give out boots of Perfect Balance or boots of Silence than a ring of Mage-Stealth.

This is pretty simple - as amusing as swords that fight for their master are in fiction, or no matter how cool a ring of Invisibility sounds - in my experience it's better when the PC's abilities, driven by the player's skills, move the game. Items which too completely solve a problem just take away the need to learn to deal with that problem. They remove challenges instead of give you a chance to solve larger versions of those problems or deal with smaller ones more effectively.


Those are pretty much the three things that drive my magic item decisions in my GURPS DF game.
Posted by Peter D at 11:34 AM