Yesterday I mentioned I had an idea for throwing weapons in GURPS.

Here are some options: 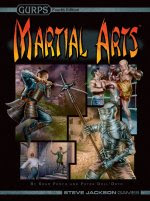 1) Prediction Shots (aka Deceptive Attack, sort-of). A -2 per -1 to Dodge only (it's prediction shooting, not really a sneaky attack.)

2) Ranged Feints. It's minus range, darkness, etc. - all penalties apply! This also kicks open the door to All-Out Attack (Feint). This does affect Block and Parry - note that only Prediction Shots says Dodge-only.

Another option is to build a new technique that allows for a combined feint-and-attack setup, but which might backfire. This is similar to the approach to Spinning (Strike) from GURPS Martial Arts, so it will use some similar language but come off a different build.

Based on All-Out Attack (Feint).

(By the way, if you are the kind of person who allows thrown weapons to use melee attack's maneuvers (Committed Attack, All-Out Attack, etc.) as written, just use Spinning Strike as written. Simply add a note that the defender can use a Thrown Weapon or Throwing skill to resist the "Feint" portion of the attack. It's fair that if you're a shuriken expert you aren't likely to be distracted by a tricky throw. Note to my players, by whom I mean Greg, I don't allow thrown weapons to do this.)

This technique involved turning in a circle or taking an extra-long windup before throwing your weapon with your full weight behind the attack. You must specialize in a particular skill (or in Throwing, for rocks and similar objects). This is a special option for All-Out Attack (Martial Arts, p. 99-100) - use the rules below instead of the normal ones for those maneuvers.

The goal behind this technique is to generate some extra power for the throw and to deceive your opponent. This may work on a less-skilled adversary, but a skilled fighter is likely to detect your plow and defend more easily. To simulate this, roll a Quick Contest of Spinning Attack against your opponent's best melee combat or thrown weapon skill before you make your attack roll, with any penalties due to range, darkness, etc. If you win, subtract your margin of victory from your foe's defense against the blow. If you lose, you "telegraph" your intentions and true target and your foe may add his margin of victory to his defense!

Next, make an attack roll against Spinning Attack, minus any penalties for range, darkness, etc. to hit your target. If you hit, your throw does +2 damage or +1 per die, whichever is more. You have no defenses. Your your spin is so severe that you must make a DX roll to remain standing regardless of whether you hit or miss with your throw.

If this is combined with Deceptive Attack, you must apply the penalty to skill to both the Quick Contest and your attack roll.

Obviously, you need a power-up:

Allows you to use the Spinning Throw technique; roll against full skill (minus situational penalties) for both the Quick Contest and the attack roll.


Like I said, I haven't tested that. Like most ranged feints, it'll be good for skilled shooters vs. close targets, only less effective if you roll badly. On the upside, it's only a Feint at -2 plus range and a throw at -2 plus range and does some extra damage. You could easily break this out into a "hard throw" technique, too, that's based on AOA (Determined) and gets the damage bonus and the DX roll not to fall but doesn't otherwise have the feint, and it'll also be Skill-2. That's useful for throwing at foe's backs, for sure.

For my players, I'd probably allow that power-up . . . but it is untested. I may have to nerf it or juice it up. I may decide it's fine at 5 points and as-written and you may decide it's bad. And no, you can't "default" the technique, because DF doesn't use techniques . . . you have to drop your 5 points before you can try it. Buyer beware!
Posted by Peter D at 2:01 PM