Use High Powered Monsters Right Away!

In reading some reviews of Volo's Guide to Monsters, I stumbled across one that mentioned the emphasis on lower-powered creatures.* This echoes something I've heard - games spend most of their time closer to "zero" than "hero" so you need more "zero" challenge monsters.

Dungeons first, dragons later, once you're earned them.

I'm guilty of this as well - look at my monsters encountered list in my higher-powered** DF game. Many of them are quite low powered. They turn up the most often. While it's taken forever for my players to fight giant rats, orcs, hobgoblins, goblins, lizard men, newtmen, etc. show up all over the place. Annoying-level oozes slime around the dungeon (and annoying slimes ooze, too.) And stirges, stirges, stirges.

I've tried - a dragon right near an easy access point. Trolls on level 1, along with weapon-resistant gargoyles, packs of wights with an unholy cleric wight, cultists with delver-level offensive firepower, electric jellyfish, a unique demon lord on level 2, etc. etc. 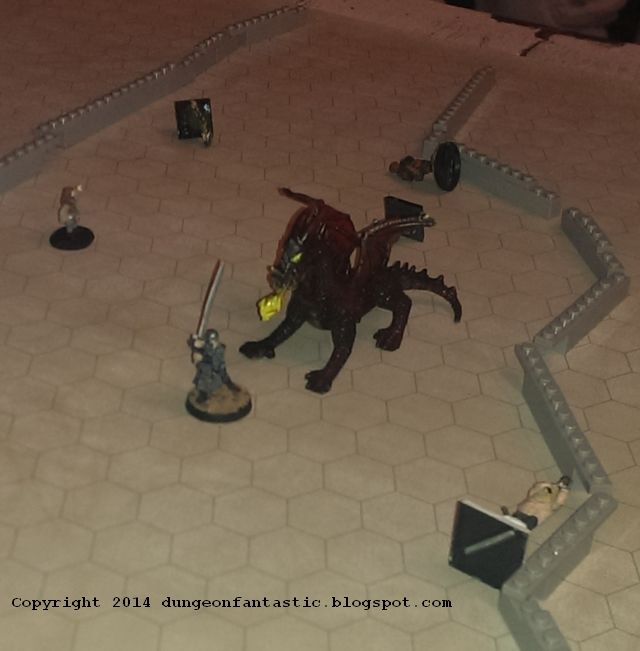 But still, there are so many cool monsters my players have yet to encounter. I'm not trying to husband them for later, but effectively, I have. By putting sufficient obstacles between them I've made them less common.

While I'd like to bill my game as pitting your powerful and capable dungeon delvers against dragons, demon lords, flying eye monsters, ghosts, and elder beings and reaping amazing hoards . . . it's all too often turned into the supermodule DULL1-7 Against the Fodder.

And that's my fault.

I need to get better at using things right away.

Not at the end of a long dungeon where it "fits." Right away. Put a beholder in room 1, and then challenge yourself to make a better boss at the end. Use dragons enough that - like in Skyrim - you never take them too lightly but never too seriously, either. If mind flayers are a thing in your game, use their minions in game one and the flayers in game two. When you need a cool monster later, just make one of the others, cooler.

Our Gamma Terra game is a good example - in the first two sessions we played we fought badders and hoops and a mutant wolverine with a force screen, killed the latter with a torc grenade, and got a warbot. In most games I've played, a warbot is something you read about but never, ever meet. We fly around in one. A death machine? Legend, not reality. They're out there to be encountered. This hasn't made the game worse but better.

No monster is wasted.

No good idea used is wasted.

No challenge is too soon.

Use them right away.

Players? This means you guys too. Go right after the dragons, the demon lords, the nests of vampire lich trolls you've heard about. Don't put them off until "when we're all powerful enough." That'll be never.

I've said much of this before.

This post is as much a reminder to me as it is to you reading it.

Use the cool monsters right the **** now.

And by the way? Same goes for magic items. I'm sorry it took so long for my PCs to find Gram, and then lost it. I should have just put the Machine of Lum the Mad or Blackrazor or the Ring of Jaylin (one of my players will know what I mean) in B2 and let the players have at it.


* That and the fact that norkers were considered, but reject. Dammit, I love norkers. Great name, cool monsters in the original AD&D form, and they make good menaces in GURPS of all power levels.

** Well, DF-standard, erring on the lower powered side of "higher powered." Cut-down race list, cut-down spell list, cut-down item list, cut-down template list, and more grit than heroism. Had I started out lower-powered, I bet it wouldn't be "wipe out this army of orcs" but even smaller change we'd be playing for. The saving grace is that characters were powerful enough that orcs by the pack are time-consuming but not actually threatening.
Posted by Peter D at 11:54 AM