Yesterday I got my latest order from EOE Orbis, aka Black Tree Design.

I won't show you most of what I got - I ordered nine packs of minis - but here is 1/3 of them. The others I prefer to keep as a surprise. Minis have the most impact when I suddenly put them down on the table and say, "You see this!"

That doesn't matter when it's wizards, orcs, and dwarves.

So here is a wizard, an orc, and three dwarves: 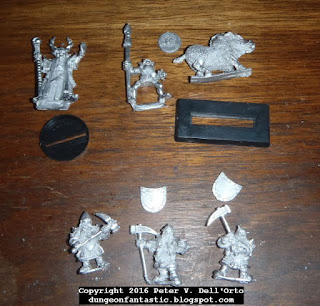 The wizard I bought just because I kept adding him to my "to buy" list and then taking him out. He's just cool looking. So I broke down and bought him this year. He'll probably be an NPC but he'd make a great figure for a DF Wizard or an AD&D Magic-User of at least mid-level.

The orc I bought because I want another one of those boars. They are so much better and more attractive than the plastic GW ones I have. This brings me up to six or seven boars, I'm not sure, but really it's so when it's one or two I have ones that won't have their tails snap off. The rider I'll paint up for the rare times I have orc cavalry show up in my games.

The dwarves just look cool. Two-handed hammers, heavy armor, and even shields. Very fantasy warfare, there (once you have plate, you don't get a lot of shields, historically) but also very intimidating. I don't need three of them. I may not even need one of them. But I'll find a way to use them because they're just cool and will be fast and fun to paint.

The others? I prepped the others to paint already - they'll get primer today if the humidity holds up. And am I spoiling things by saying some of them are on the level the PCs have been exploring? Probably. Forget that last line or two.
Posted by Peter D at 9:46 AM