The Known Entrances of Felltower

Hey buddy, how do you get into that place, anyway?

Much like my Monsters Encountered So Far post, I thought I'd do a roundup of entrances the PCs have heard of or confirmed the existence of for Felltower.

Bugbear Tunnels - a narrow entrance requiring crawling, from the surface ruins on top of Felltower. Current status: Unknown, known to the orcs, believed guarded or trapped.

Dragon Cave Mouth - a mouth-shaped cave on the west side of the mountain, leads to the cavern warren roughly 100' or so below the first level of tunnels. Originally guarded by a fierce dragon. Current Status: Occasionally used by orcs, otherwise unguarded. 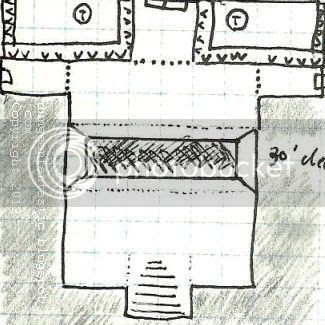 Orc Entrance - unknown location, but it's known the orcs enter the tunnels under Felltower via a tunnel, possibly from a cave-riddled canyon to the north.

Underwater Entrance - an underground inlet to the Silver River believed to reach deep into Felltower.

Tower Entrance - there is a "hatchway" entrance under the collapsed ruined tower knocked down by the PCs. Current Status: Often locked from within, guarded by orcs, and inside the restored fortress of Castle Felltower.

Well Entrance - a secret entrance at the bottom of a dry well. Current Status: Inside the orc-guarded restored fortress of Castle Felltower, possibly blocked up.


There are rumors of other ways in, too, but they may have been identified already:

But so far, that's it. In case you are wondering why the PCs keep hitting the same well-traveled areas, you might understand a bit better. Many entrances are orc-guarded, and it's unclear how to effectively utilize the more difficult ones (the underwater entrance, say.)