Over the course of the day I assembled three figures from my new Wargames Factory orcs box.

My goal with these was:

- only use parts from one sprue, just so I have an idea of the limitations on my assortment.

- try to make them look good, but not at the cost of being in very breakable poses. 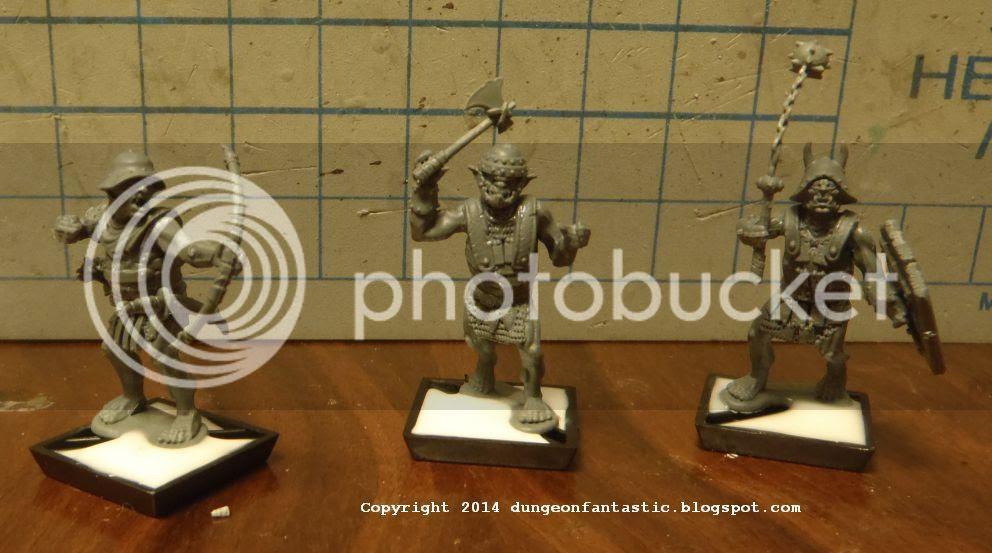 That axe guy will get a shield from my bits box pretty soon. I wanted a picture with just the Wargames Factory stuff, and the crescent-shaped shield is . . . yeah, I don't like those. I can't find a way to position them on the arm that looks safe and useful. 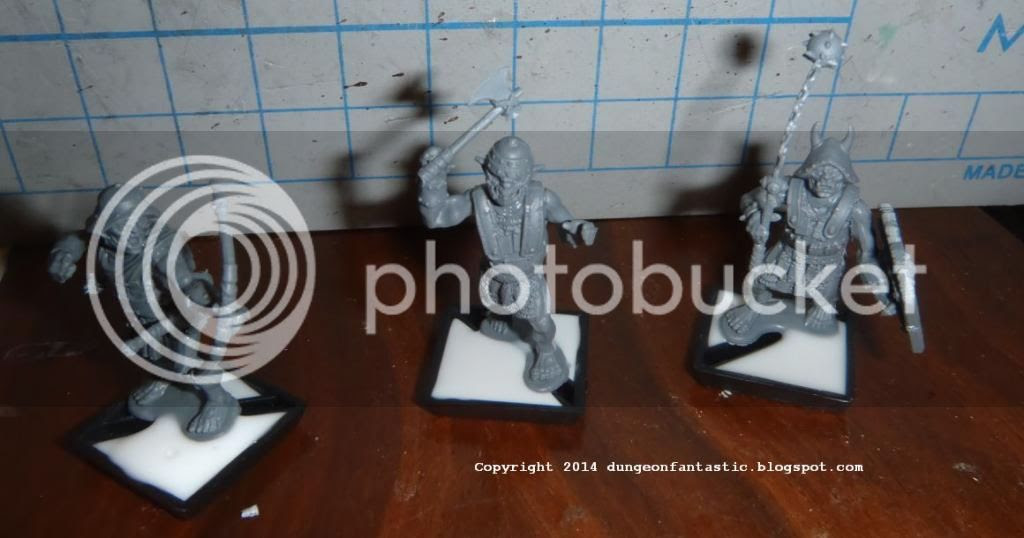 As you can see, I'm basing them on square 20mm bases, because I have a metric ton of them and no use for them. Giving them a slightly smaller footprint will make it easier to deploy them in bunches on a battlemat. The white is glue - Elmer's glue-all. I turn the bases upside down, glue to minis down to the slotta ridge (at least, for these guys) and then fill in the base with glue. It'll dry and settle, giving a solid connecting for the mini to the base. Then I'll fill it with basing materials and cement that down, too, with watery glue. Having a flat base makes it easier to deal with levitated figures in a game.

- the no-socket flat mesh connections means fairly weak connections. I see breakage in the future for these guys. For the next batch, I'll go back to pinning them. I already scored the surfaces to get a rough surface to glue, which experience has shown me will work better. And I'm using the right kind of plastic glue. Still, they aren't very strong connections.

- I see the "reversible" nature of the torsos, and on a couple it doesn't look great. This is a feature I could do without.

- The arm positions are a bit odd, although it might be my choice of arms.

- The weapons are really attractive, and the right size. I think I might need to clip the morningstars and make them drape down like they aren't being actively swung, just to keep them intact during travel to and from game.

Overall, these guys seem like a good addition to my orc pool, but maybe a bit odd looking and/or fragile. I see them getting deployed when I don't have a metal figure that fits the bill. I'm going to take the opportunity to give them the rarer weapons in my collection - and fit them out with leftover GW weapons to do so. In the future I'll just clip all of the legs, torsos, heads, etc. into one box and make some more interesting mixes, too.

Not a bad investment for the verisimilitude of my game and the minis I deploy, overall, but it could have been better. So far, let's call it a 3 out of 5 for quality, 4 out of 5 for value.
Posted by Peter D at 8:34 PM