Also on sale around the end of last month were some Black Tree Design minis. I got a couple of orcs: 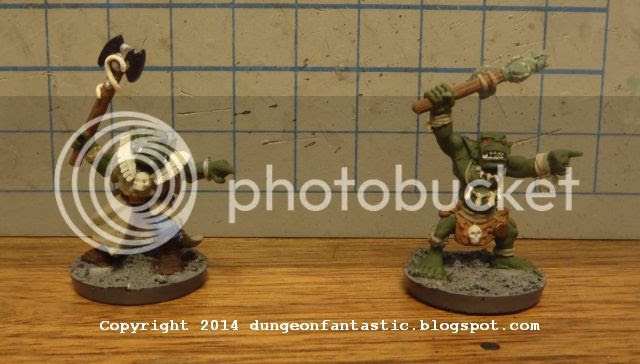 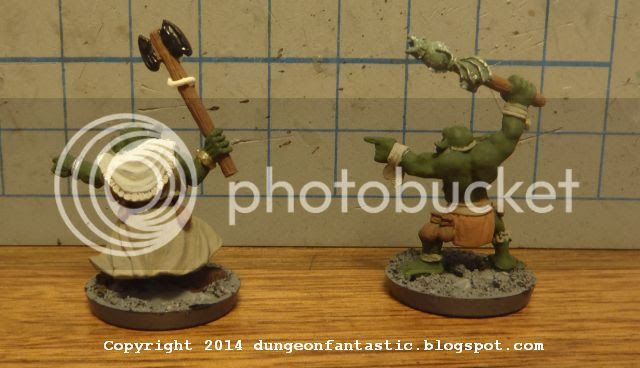 
Those guys are fully base-coated, and if I (somehow) have time tonight I'll brush them with Army Painter Quickshade. I half-painted them in one session (primed, then painted the flesh) and then finished the whole job yesterday while I was doing some listening (painting helps me concentrate on what I hear, I find.) Very quick paint jobs, using the painted examples on the BTD website to give me some ideas (or all of my ideas, for the first guy.) I really like the quality of these figures.

Overall, I'm quite impressed with them. They have just enough detail to get better as you paint them, but not so much detail I had to fiddle with the mini and blackline and shade and choose colors to get all the details right. The have a low, squat, but not too-short stance, which bodes well for packed orc vs. PC fights. For some reason, I didn't notice this orc shaman, but I guess I have plenty. I wanted a couple more basically because my players see the same 2-3 orc shaman figures I have regularly, and have to ask "Same guy as last fight? Or just the same mini but it looks like a different orc?" I'd rather have a little variety.

Originally they came on square 20mmm bases but as usual I based them using my "cup base" style and put their slot-tab bases into inverted 25mm round bases. Once they've been Quickshaded, I'll do the bases. I find that works best because I don't worry about the Quickshade gumming up the bases, and if I miss when shading or painting or gluing I have a tiny window to fix it because the hard shell of Quickshade keeps the material from scarring the paint underneath on the actual figure.


Actually, I also got some other figures I'll debut at another time. I had a (positive but time consuming) change in my non-gaming life which probably means I'll be painting a little less. So I'm hoping to get a few more done ASAP so they can be used on the table.
Posted by Peter D at 12:49 PM