I always liked black dragons. Swamps, acid-spitting, cool looking forward-angled spiky horns in the pictures. Swooping up out of Xak Tsorath, lurking in the fetid swamps in I8 The Ravager of Time, and menacing from the edges of dangerous territory. 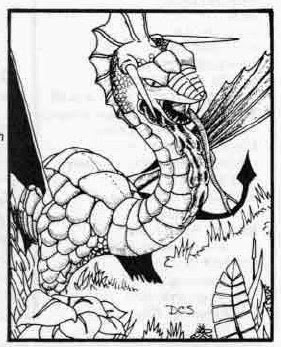 So this description of a black dragon lair from the new Monster Manual grabbed me.

"A black dragon's lair is a dismal cave, grotto, or ruin at least partially flooded [. . .] where its victims can ferment. The lair is littered with the acid-pitted bones of previous victims and fly-ridden carcasses of fresh kills, watched over by crumbling statues. Centipedes, scorpions, and snakes infest the lair, which is filled with the stench of death and decay."
- Monster Manual, p. 89

That and this bit from their "Foes and Servants" section.

"Evil lizardfolk venerate and serve black dragons, raiding humanoid settlements for treasure and food to give as tribute and building crude dragonic effigies along the borders of their dragon master's domain."
- Monster Manual, p. 89

I read that and basically sat up and thought, I need to write up a black dragon's lair. I can picture that in my head, picture the swamp with the lizardfolk lurking on the fringes of vision and you look at their crude, fog-shrouded effigies hoving into view as you walk on a wet "road" that only takes you deeper into some place no one has lived in centuries for reasons that become clearer with each step. A sinister black dragon waiting within, patiently building up its power and wealth, as its servants stalk you and try to end your trip before you reach the half-sunken ruins that house the dragon.

So yeah, to my players - don't go into any swamps on my map of the area. You already know what lurks there. Don't doubt for a second that I would spraypaint that dragon mini black if I had to.