Here is the usual disclaimer for a GURPS book written by Sean Punch - Sean is my friend, often my editor, the GURPS Line Editor, and sometimes my co-author. I'm not remotely impartial. But I am using this still in play, and I do know a thing or two about monsters for GURPS. 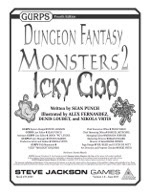 Each is done up in a full, ready-to-go (and ready-to-roll) DF monster stat block. Each is lethal in a DF kind of way, which is more "save or die" than "realistic, slow, long-term effects." Mold in DF doesn't give you immune system issues five years down the road, it inflicts horrible things on you right now. Often with the help of painful puns and nod-and-wink nastiness that brings to mind NetHack and very old editions of fantasy role-playing games.

If I've done my math right, you can generate:

36 kinds of fungi
2 kinds of jellies
27 kinds of molds
1 ooze
6 colors of puddings
15 kinds of slimes (ranging in lethality from "weak" to "virulent.")
36 kinds of spore clouds

That's not counting pre-statted scaling for larger patches of all of the above. Sometimes much larger patches. And some of them change as they get larger. And that's not counting applying aspects of one kind of slime to another kind of slime - you could give an ooze mold defenses, or give slimes pudding colors and powders, etc. as well if you'd like.

One great thing about these slimes is that they are nasty. They are minor foes in most cases, but not dinky distractions. Their abilities are dangerous, their poisons potentially lethal, and their attacks potentially fatal. They aren't without their defenses, either - ask my players, who ran into fire-resistant slime that gave them quite the surprise.

The books is complete. Want to know the sale value of slimes? There. The technical split between a fungi and a pudding and an ooze? Done. Which skill to roll to identify them, categorize them, or salvage their salable bits? Done. You won't be left with a lot of slime-related questions.

There is art, as well, although it's not up to the same size and detail of the art in DFM1. It's all older art (mostly Denis Loubet) re-purposed into slimes, etc. The good part about that is that if you have Cardboard Heroes you have all the counters you need to deploy these suckers (slimers?) on the map.

Great quotes, too - Lovecraft, The Blob, and this Sean Punch gem:
"Goo lack the weaknesses of organisms that have internal organs, eyeballs, debts, and regrets."

If you need more slimes for your Dungeon Fantasy game, this is the book for you. If you just want some perfect wandering monsters and mindless (and soulless, and remorseless), get this.

Overall: I like Sean Punch's work a lot, so I like this. But even more so, I've already used slimes and molds from this book in my game. I've written a couple of my own monsters using spins off of the powers involved here. And I've revised some oldie-but-goodie monsters of my own to bring them more into line with this book. It's great material and I highly recommend it to Dungeon Fantasy GMs.
Posted by Peter D at 7:53 AM