I wasn't sure what I wanted to do with these bugbears.

First, I don't have a "bugbear" analog in my games, and I used the name for something else entirely.

Second, they have comically large weapons.

But they're pretty cool looking figures, and I do have seven of them from Bones II.

I started to paint them in some standard Bugbear yellow-ish, figuring I'd paint them and them use them as . . . something. Mutant gnolls or hairy ogres or something.

But Jim Holloway mentioned doing his as ice-dwelling critters for Frostgrave.

I immediately re-based one in grey, figuring to do grey/white/black ink/white drybrushing and make them yetis or something. But then Jim posted this guy in blue: 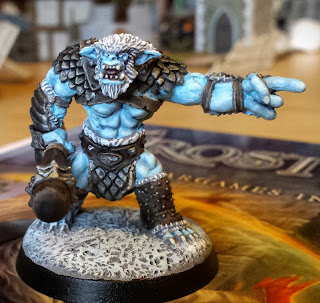 I like that. It's not exactly a sensible fur color, even in the snow, but I like it. Also, I can explain it by being their "underground" color or something of that sort. After all, glacial dungeons are a thing.

Second, I re-did their metal weapons in blue tones and white, hoping to make them look like ice. That hasn't worked so well, yet, but weapons made out of ice was cool in DL6 Dragons of Ice and it'll be cool here. 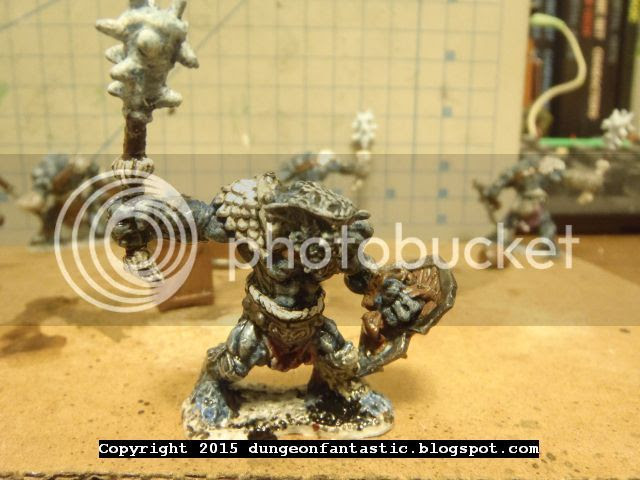 Mine are only half done. I got the dark blues and light blues in, and some (actually, lots of) black ink wash to line all of their gear. 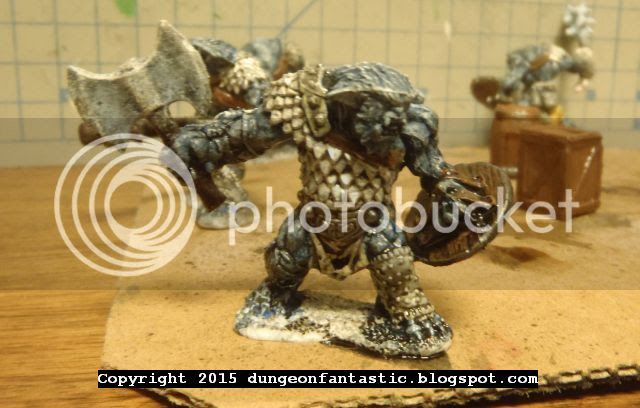 I'll go over all of the fur and flesh in blues and whites again to brighten them up. Once I do that they'll be much brighter. Not as bright as Jim's because I don't have a lot of light or bright blues.

I also need to re-do their scale armor - it's done in metallic pearl white, and I'll need to go over it again and add some white to the metallic paint for some drybrushing on the armor as well. It needs to be much brighter and more clearly white. It's actually brighter in the picture than in person. Either way, white scale armor. Is it painted leather? Dragonscale? Glacial ice chips? Frozen Essential Water? I'm not telling . . .

Usually I don't post minis my players don't know about. But I think by now they know I have a lot of snow-themed monsters available in DF. This is just making "ice trolls" (sno-gres?) or "yetis" a well known feature of the very, very frosty north and far, frozen south. Hopefully when pointers to ice-locked treasures emerge the players won't ignore them.
Posted by Peter D at 7:31 AM