I snapped up some of the Black Tree Design minis I'd been eyeing.

Some are secret, because I have ideas for them and I don't want to reveal them to my players just yet. Shocking, I know.

One was basically a request from last year - the Barbarian King:

Like I said the other day, I don't know how I'll use him. But I'll manage. I had to pass on some other barbarians because I have a lot already. This guy is sufficiently interesting that he'll be fun in game and if I ever get to play a minis game. I'd image he would get extra sighting bonuses from his vantage point, triple the hits to kill, triple attacks if you foolishly engage him, that sort of stuff . . .

I also absolutely don't need this guy. I also recognize how hard it is to use him in game except as a statue. But it was too hard not to buy him. He looks fun to paint, and at $2.75 and with a little Christmas money waiting around, he was a good pickup. After all, if someone had purchased him for me, I'd have been very excited. 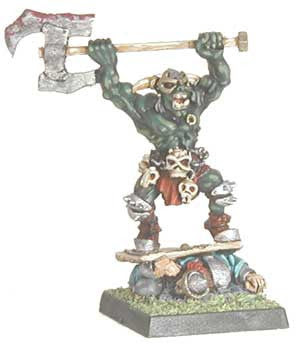 So I'll get him prepped and painted and figure out what to do with him. He looks like a good orc champion or something. He'd actually make a good demon or devil, too, done up with the right colors. Or a statue. As odd as it'll be when he moves around with a corpse under him and that pose, well, the visual impact is great.

I had to resist some Zulus because I really don't need them at all, plus I'd want to paint them very carefully. That would mean buy now, open, stick in a storage box, and paint in five years or something. Better to just pass. Everything I got I won't be able to paint up fast enough.


And just FYI for all minis companies:

- Have a persistent cart

That way I don't get logged out, or reboot my PC, or otherwise mess around and lose all of the stuff I was looking at. I was able to reconstruct my cart from memory, but hey, don't make it hard for me to find the stuff I wanted to buy but didn't quite get around to buying. BTD's new website is pretty good but occasionally I managed to lose my cart and have to start over. I'm more likely to forget something than add extra, when that happens.
Posted by Peter D at 12:02 PM