How tough was Baron Sterick the Red?

So Baron Sterick the Red was slain in my Felltower game.

How tough was he? 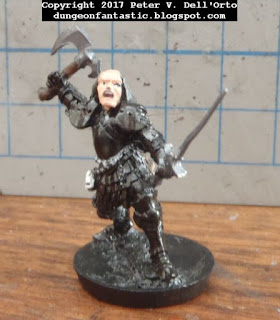 
Sterick was a human knight and clocked in around 525 points.

A good chunk of that was non-relevant skills like Strategy, Tactics, Leadership, etc. It included his Born War Leader 6.

Most of the rest? Combat. He's a knight, like I said. Highlights include:

. . . and a custom variant of Unkillable.

His skills included Axe/Mace-27 and Broadsword-28, and solid skills in Shield, Thrown Weapon (Axe), and Brawling and Wrestling. Nothing great, though - solid for his DX and point level, but nothing special.

He also had a Bad Temper and an Obsession with raising a kingdom.

Weapon-wise, he did 3d+11 cutting or 2d+7 impaling with Magebane, and 3d+13 cutting with Shieldslayer.

Gear-wise, he had something close to $250,000 worth of gear using Basic Set prices and DF1 modifiers. That's pretty amazing, but considering that Vryce lost all of his gear once, including some great weaponry and solid armor and still had close to $80,000 worth of gear and probably another $10-20K worth of consumables it wasn't so lopsided. At the top end, costs start to multiply for a simple +1 here or there.

So he was a tough fight. He couldn't be permanently put down by mere combat, but combat would set the stage for his defeat. The first crew made the mistake of a lack of clarity of mission - it was half "let's talk to him" and half "and then kill him if he attacks us." They still came close thanks to Lightning spells. The second group had the advantage of a better main fighter, and total clarity of mission - "Get the bodies and escape if possible, if it's not, kill Sterick." Some excellent rolls on buffing potions helped immensely, too - but were countered by some improbably rolling by me for Sterick to keep him in the fight. It still cost them a headless PC.